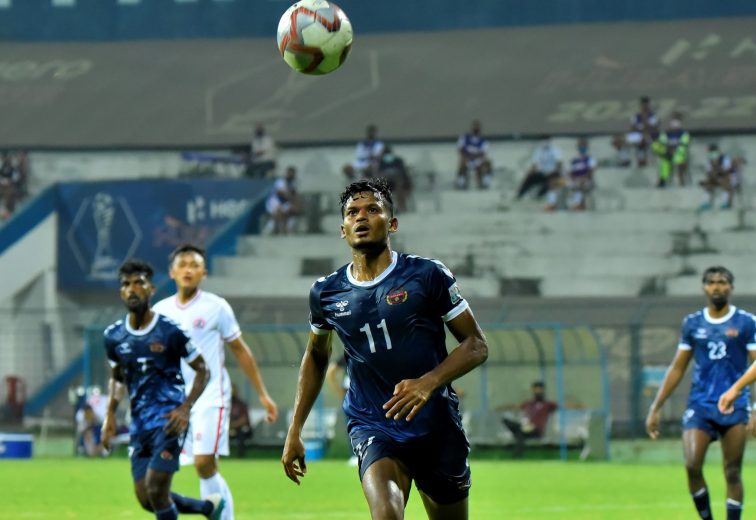 After going winless and picking up just two points in Phase 1 of the Hero I-League 2021-22 season, Kenkre FC have given themselves a fighting chance with back-to-back wins to kick off Phase 2. The Mumbai-based side are playing at this level for the first time in their history and they have no wish to go quietly.

No one exemplifies that attitude in the Kenkre camp more than forward Ranjeet Singh Pandre who has been instrumental for the Hero I-League new boys.

“The mood in the camp is very good. Everyone is enjoying playing football at this level. I think we deserved some wins in Phase 1 but were unlucky not to pick up any points from such games. We needed that one win to boost our spirits and now we are playing much better football,” he said.

With three goals to his name, he is Kenkre’s top scorer but the 27-year-old shrugged off any suggestions that his team is over-reliant on him.

“There is no pressure on me to score goals. The coach and my team-mates motivate me to play to my strengths and give my 100 per cent. We have many goal-scorers in the team like Vijay Nagappan, Akeraj Martins and Kynsailang Khongsit to name a few. If it is not my day, then they will stand tall for the team,” he said.

Born in the city of Rajnandgaon in Chattisgarh, Pandre made his name in Mumbai, turning out for the Union Bank of India team in the Mumbai District Football Association (MDFA) league before going on to represent Maharashtra in the Santosh trophy.

“Playing in the MDFA leagues and in the Santosh trophy was important for my early development as a football player. Being the early steps of my career, those 2-3 years helped me get better and are helping me perform at this level. I hope I can improve further.”

Pandre is hoping his success can inspire more youngsters to take up the sport and excel back in his hometown.

“I know we have many talented players in Chhattisgarh but as it is with most things, some players get into good teams and others are not that lucky. But what matters most is whether you have given everything to achieve your goal. If not, you must try again and if you love the game and play with your heart, no one can stop you. You cannot give up on your dreams.”

Momentum is certainly with Kenkre as they aim to stave off relegation with just three games to go and you can be certain that Pandre would be at the heart of it all.

“I always believed that we could do better and that we needed the one win to get back on track. Other than two or three games where we were outplayed, the others were close encounters which we were not able to get anything from. We have three games left and getting points from those would be good for our Hero I-League journey,” he concluded.