Rajasthan United back to winning ways with clinical performance against NEROCA 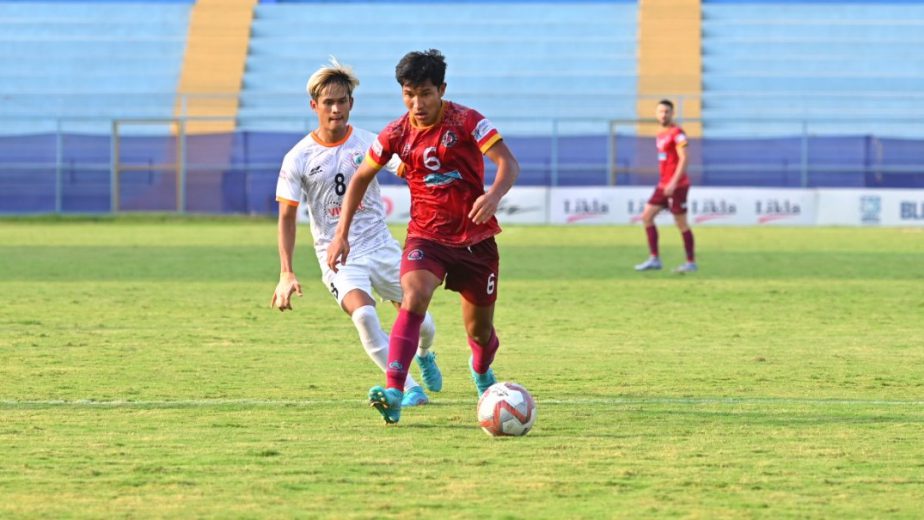 Two second-half goals for Rajasthan United against NEROCA FC were enough to end their four-game winless run, here at the Naihati Stadium. A goal from Biswa Darjee right after half time and a late strike from Pedro Manzi got Rajasthan off to a winning start in Phase II.

Unlike the Phase I encounter between these two sides, the game got off to a very cagey and slow start. Neither goalkeeper was tested as the final third performance of both sides was disappointing. When it looked promising, the attacks were stalled by astute defending at both ends.

Aman Thapa looked menacing down the left and won a corner inside five minutes. The ball from the set piece ended up at the feet of Julian Omar Ramos, who shot it straight into the stands behind the goal. Shortly after that, Rajasthan lost the ball cheaply in their own half but Ricky Shabong was alert and calmly intercepted and nodded a lofted ball back to his keeper.

Shabong’s game was cut short after an unfortunate injury forced him to go off just before the half hour mark. Biswa Darjee came on to replace Shabong as Rajasthan United trotted forward with Pritam Singh. Singh shot from distance and kept it on target but failed to get the required power on it as keeper Shubham Dhas collected the ball easily.

In first half stoppage time, Anil Chawan came flying in with a strong challenge on Abdul Salam and got his name taken by the referee. NEROCA were unable to cause any damage from the resulting free-kick after it was hurled in towards Sergio Mendigutxia. The first half-half ended with Rajasthan having only one shot on-target and NEROCA with none.

The second half was nothing like the first. Aman Thapa won a corner after forcing a save out of Shubham Dhas from close range. From the resulting corner, the ball was cleared off the line by Lallenmang Sitlhou.

The very next attack resulted in the opening goal of the match. Sardor Jakhonov put a delightful cross into the box from the left and substitute Biswa Darjee headed it into the back of the net. The header was quite close to Shubham Dhas and the keeper could have done better with that effort.

NEROCA were trailing and an injury to Ben Nash Quansah added to their concerns. The defender was stretchered off but came back on to bring some relief to his side. NEROCA almost equalised when Abdul Salam picked out Sergio Mendigutxia with a long throw into the box. Keeper Bhaskar Roy came forward to collect it but spilled it in the process. Luckily for him, his defence was alert and dealt with the ball well.

Davis Kamanga, who had a quiet first half, sprung to life in the second. Dribbling and passing through the middle and final third, the Zimbabwean caused a lot of problems for the Rajasthan United defence, clicking well with Sweden Fernandes and Sergio Mendigutxia on multiple occasions.

At the hour mark, Bhaskar Roy came up with a brilliant save to deny Sergio Mendigutxia. A few minutes later, Anil Chawan put his body on the line as Rajasthan made 2 consecutive blocks and a save to keep the NEROCA attack at bay. Another chance for NEROCA came via a brilliant run and cross from Abdul Salam. The full-back’s deep cross was headed towards Kamanga, who blasted it over the crossbar.

The game was put to bed in stoppage time when substitute Alocious Muthayyan put Pedro Manzi through on goal with a clever pass and the Rajasthan United skipper made no mistake in tucking the ball into the net. Manzi could have bagged a brace in the last minute of the game but his shot from close range rattled the crossbar and stayed out.

All three points and a clean sheet lift Rajasthan United up from the bottom of the Championship Playoff table as they go above NEROCA FC, into 6th place. Both sides are only separated by a single point.