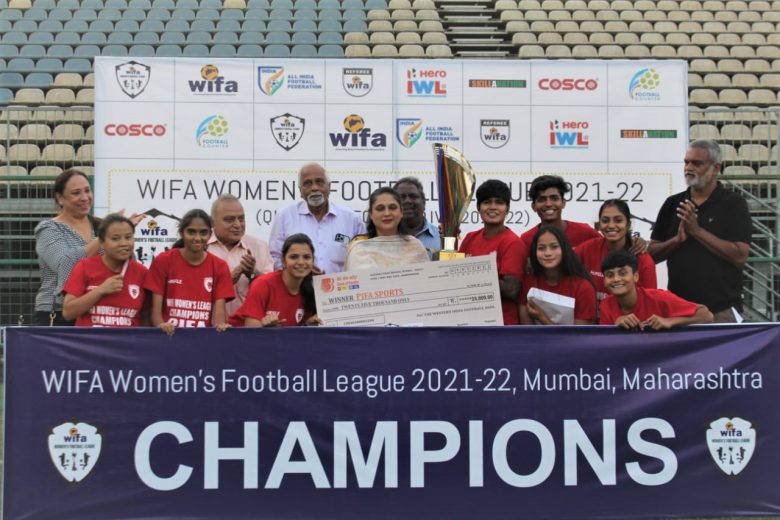 The “Invincibles” of Maharashtra Football had a spectacular WIFA Women’s Football League campaign where they not only remained unbeaten throughout the league but also did not concede a single goal.

“It is the end product of four years of hard work and determination”, acknowledged the co-founder, Mrs. Anjali Shah.

The Mumbai-based club kicked off its league campaign against Next Sports Academy and scored 19 goals. Over the course of the league, they scored 43 goals. Their key player in scoring so many goals was Sasmita Behera. The Odisha-born forward scored 10 goals for the club in 08 matches and won the Golden Boot for being the top scorer in the tournament.

The Setup Behind Success:

The forward said, “Our coach Nirvan sir used to set up an attacking 4-4-2 formation. He advised me to switch positions with the other forward from time to time so that we could create confusion for the opposition defenders. This was a major factor behind my goals.”

The head coach (also co-founder) Mr. Nirvan Shah, who has been with the club from the beginning, said, “Our pre-season preparation went really well and we put a lot of emphasis on the Sports Science. This helped with the recovery of the players and many other things as well. We Also used to do various workout sessions to keep ourselves fit.” 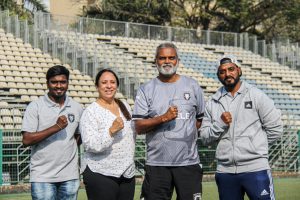 Mrs. Shah added, “We hired a sports psychologist to inspire the girls with positive thoughts. We also had a nutritionist who took care of the girls’ diet.”

The journey so far:

PIFA has been participating in the IWL Qualifiers for the past four years and has faced several setbacks along the way.

“We have been unlucky a few times in the past. We missed out on qualifying for a point once. Last season, we were on the verge of qualifying but the league was canceled due to COVID-19. This season we decided that we would put a strong team in the league and qualify and we did”, expressed a very happy co-founder.

She also admitted that they had to spend twice in a single financial year and it was difficult for a club with fewer sponsors.

Squad and its attitude:

Most of the PIFA team consists of players from Maharashtra. Only 5 players were from other states.

“This team has been practicing together for more than a year. They get each other very well and understand me very well too. We used to analyze every opponent before the game and set up accordingly. After the game, we used to sit together and discuss our mistakes. ‘Building from the back’ was our strategy. I always told my players to make room for our attackers so that they could open up the opposition defense and score goals, they did it in games, so we scored a lot of goals”, narrated a jubilant head coach. 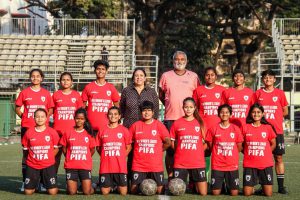 Club Captain, Deepika Kumari lauded the resilience of her squad and said, “I love every minute of playing with this bunch. I love being associated with this club. But I would be lying if I say it was easy. In the past, we have missed the final round by a small margin. It takes a lot of courage to come back year after year, ready to give the best again.”

What it means for women’s football in Mumbai:

The financial capital of India recently hosted the AFC Women’s Asia Cup and this title win of PIFA will surely provide a platform for the young girls of Mumbai to take up football as a career option.

“It has been in our ethos and motto that we scout potential players and we make them grow. Our focus has always been on youth development. Along with this, we are very concerned about the fitness, wellbeing, and mental health of the players”, she added.

Mr. Shah said, “We organize Baby League every year and we also work in grassroots development. We are also spending a huge chunk on our youth sides. After this achievement, we are going to be more focused on women’s football and we will try to create a footballing atmosphere for the budding women footballers of Mumbai.”

The club will soon start preparations for the National top tier. According to reports, the Indian Women’s League (IWL) is set to kick off this summer.

Dipika, who is also the club’s longest-serving player, thanked the head coach and the management and said, “I think a lot of credit goes to Mrs. and Mr. Shah for this win. They have always believed in us and pushed us to perform better both on and off the pitch. We as a team undoubtedly appreciate the time and effort they put into each and every one of us.” 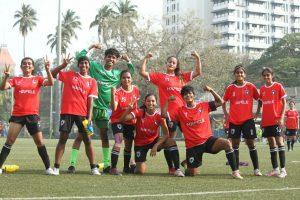 “We plan to continue training till the IWL dates are confirmed by the All India Football Federation. I am sure our coaches will take this time to work on our fitness along with the shortcomings seen in the IWL Qualifiers. Going forward, our aim is to do our best and give our 100%, as we have done so far,” she added.

Mrs. Shah said, “I, the head coach, the management, and the players are confident. I have faith in the team. We will be looking forward to fielding the majority of this team in the IWL as well. We have identified some key areas that need reinforcement so we are also looking at bringing in some new additions.”

The real work of PIFA begins here. In the IWL, they will be eager to replicate everything that helped them win the title in the WIFA Women’s Football League. One thing is certain, if they are adding a few players to their roster, they will have gel-up quickly and start practicing together for a bigger prize.