Hero I-League defending champions Gokulam Kerala FC, led by star striker Luka Majcen, are once again setting the pace at the top of the table this season. The Malabarians are still unbeaten, with eight wins in 11 games and are also the league’s top scorers with 30 goals. More than one-third of those have arrived from the boots of Luka Majcen.

The Slovenian rose to the top of the individual goalscoring charts with 12 goals after his spectacular hat-trick against Sudeva Delhi on Friday. It was Majcen’s second treble of the season which also helped him surpass his previous season’s tally of 11 goals for Churchill Brothers.

Majcen also has four assists to his name and only Mohammedan’s Nikola Stojanović has more. He has contributed either a goal or an assist in eight out of his 10 matches so far. Arguably, his most significant performance came in the 3-2 win over TRAU as he found the net twice to aid his side in winning an absolute thriller. 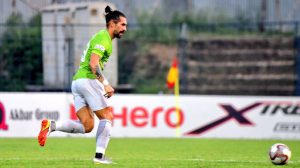 The 32-year-old’s 12 goals have come from just 20 shots on target – a staggering 60% success rate. Majcen is not your typical striker. As Gokulam Kerala employ high pressing tactics when out of possession, he is almost always the player furthest forward on the pitch. With 33 tackles, 25 interceptions and 22 ball recoveries, it is evident that Majcen plays a key role in winning possession in the attacking third.

All things considered, Gokulam Kerala are not a one-man army and have eight different goalscorers this season, the most of any team. Luka Majcen’s success is not his alone, with the interplay between him and a number of players like Jourdain Fletcher, Jithin MS, Thahir Zaman, Emil Benny and new recruit Ahmed Razeek a crucial factor in the Malabarians’ offensive prosperity.