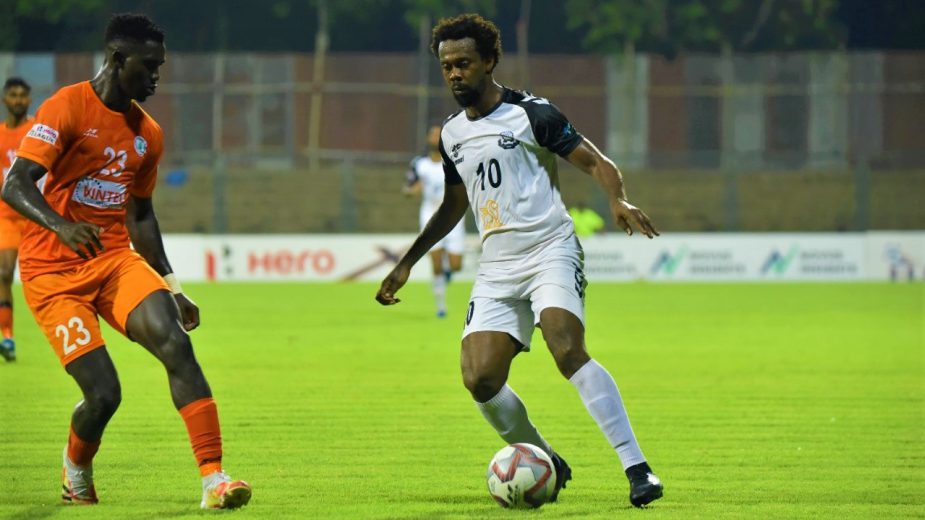 Mohammedan Sporting Club and NEROCA played out an exciting 1-1 draw in the Hero I-League 2021/22, here at the Kalyani Stadium. Marcus Joseph headed Mohammedan into the lead, before Sergio Mendigutxia scored an opportunistic goal to level and ensure both teams shared a point each in a match of missed chances.

The draw meant that Mohammedan continue to occupy second position in the league table, while NEROCA moved into fifth position, ahead of Churchill Brothers who have played a match less.

Mohammedan Sporting kicked off with clear intentions and hit top gear early. Andelo Rudovic, from the left, put the pressure on NEROCA early by floating the ball into the box which had no takers at the far end.

Against the run of play, Mohammedan won a never-to-be corner-kick, which led to the opening goal which also included casual defending by NEROCA. Off the corner, Brandon Vanlalremdika played back to Rudovic, who in turn intelligently put Brandon into possession. Moving deep into the box, Brandon crossed and to his delight found striker Marcus Joseph to utilise the opportunity of not being marked by defenders Md. Abdul Salam and Thokchom James Singh and head home his 11th goal of the season past goalkeeper Prateek Kumar.

Stung by the goal, NEROCA upped their ante and began to attack. For the next few minutes, they were all over the Mohammedan half. During this period of dominance, the closest they came was when Md. Abdul Salam’s cross that dangerously hung in the box before the Mohammedan goalkeeper Mithun Samanta did well to collect ahead of Sergio Mendigutxia who was just arm length away.

NEROCA were finally rewarded for their effort once again off a corner kick. Yumkhaibam Jiteshwor Singh drove the ball across the field and found an unmarked Sweden Fernandes inside the box. An angular drive by Sweden was well read and covered by ‘keeper Mithun, but a fumble in collection was just enough for NEROCA striker Mendigutxia to capitalize and tap home his 10th goal of the campaign ahead of defender Sujit Sadhu.

Mohammedan were first up when Joseph headed over a cross that Brandon played from the left after the NEROCA defenders were once again caught napping. Another chance came by when Nikola, from the top of the box had his left footer get a deflection but agonisingly miss the post by inches and roll out for a corner.

NEROCA had their share of luck also get wasted. Mendigutxia, on the left, found himself in the clear after defender Asheer Akhtar was found napping, but a feeble try from inside the box was well covered by the ‘keeper Mithun.

Closing in on half time, Sweden Fernandes swung a measured cross for Mendigutxia, but Mithun did well to collect ahead of his attacker.

Mohammedan had the last say before the break with a chance they would want to forget. From the left, Rudovic chipped well to create confusion in the box. With the NEROCA defence failing to clear Joseph, who did not expect the ball to fall in his path squandered a chance from handshaking distance.

The second half began with Mohammedan almost scoring. Joseph had his header rock horizontal which fell in the path of Stojanovic, whose attempt was put away by goalkeeper Prateek for a corner-kick.

The game thereafter was a case of desperate moves. Both teams defended well, and the game was a battle in the mid field with a rare case of attempts. Bot teams picked up a yellow card each  – Peter for NEROCA and Lalramchullova (Mohammedan) for unnecessary fouls.

Into the closing minutes, NEROCA had Mendigutxia’s attempt from a free kick test the Mohammedan ‘keeper, which was well covered after a slight fumble.

In injury time action, NEROCA almost scored. Substitute Vicky Metei, who came in for Sweden Fernandes, took off on a solo, outpaced defender Manoj Mohammed but fluffed his chance with just the ‘keeper upfront.