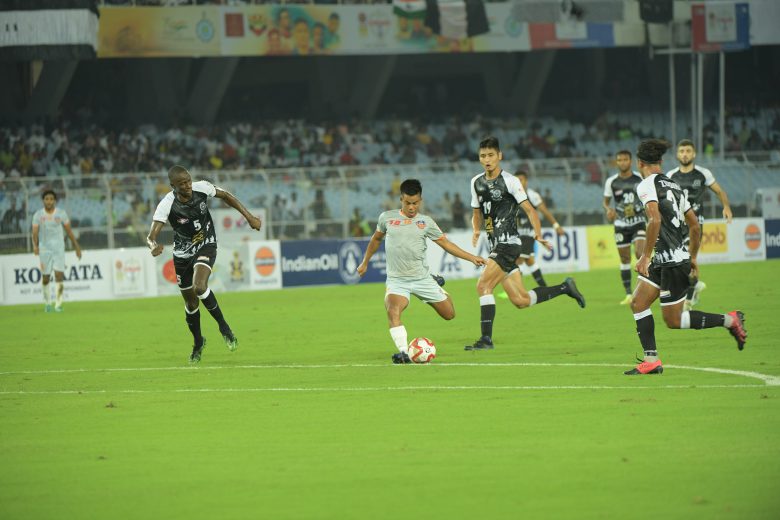 Goa, August 16, 2022: A first-half strike by Muhammed Nemil gave the young FC Goa side a real spark but turned out to be only a consolation for them in the end, as they went down fighting 1-3 against Mohammedan SC in the Durand Cup 2022 opener on Tuesday.

Three first team players, viz. Hrithik Tiwari, Nemil and Phrangki Buam made the cut for FC Goa head coach Deggie Cardozo’s starting XI as new signing Ayush Chhetri was named among the substitutes. The young Gaurs made a positive start as they carved out their first opportunity through Muhammed Nemil, whose shot from distance in the 8th minute flew just over the crossbar.

This served as a wake-up-call of sorts for Mohammedan SC, who then started resorting to heavy pressing in a bid to frustrate their opponents. It almost bore fruit in the 30th minute, when the Kolkata-based club were able to win the ball back and orchestrate a counter-attack. The ball eventually fell to Vanlalzuidika on the right flank, whose perfectly-timed cross found Pritam Singh in the box. The latter, however, fired wide much to FC Goa’s relief.

However, it was the Boys in Orange who drew first blood just four minutes later, as Nemil found himself in the thick of things once again. The young midfielder got the ball outside the box and looked up to see Mohammedan keeper Shankar Roy’s positioning before curling it into the top-left corner, leaving the keeper and the rest of his teammates speechless.

Returning from the half-time break, the I-League outfit took just two minutes of second half play to restore parity on the scoresheet. Pritam Singh made amends for his earlier miss as he capitalised on a loose ball inside the box and volleyed it home from close range.

The second half of the match also saw FC Goa goalkeeper Hrithik Tiwari rising up to the occasion multiple times. The Assam-based lad pulled off a stunning double save in the 59th minute to deny the opponents before following it up with back-to-back saves in the 73rd and 74th minute to keep Goa in the game.

Ten minutes later, however, Mohammedan SC took the lead, as they capitalised on some tired legs in the Gaurs’ ranks. A quick counter-attack eventually ended with Faslu Rahman slotting the ball into the back of the net with a fine onrushing header. Then in the second minute of added time, Marcus Joseph added the finishing touch with his team’s third goal.

FC Goa are hence yet to open their account in Group A of Durand Cup 2022, while Mohammedan SC took home three points. Next up in the Durand Cup for the Boys in Orange is a clash against the Indian Air Force at the Kishore Bharati Krirangan on Friday, August 19.