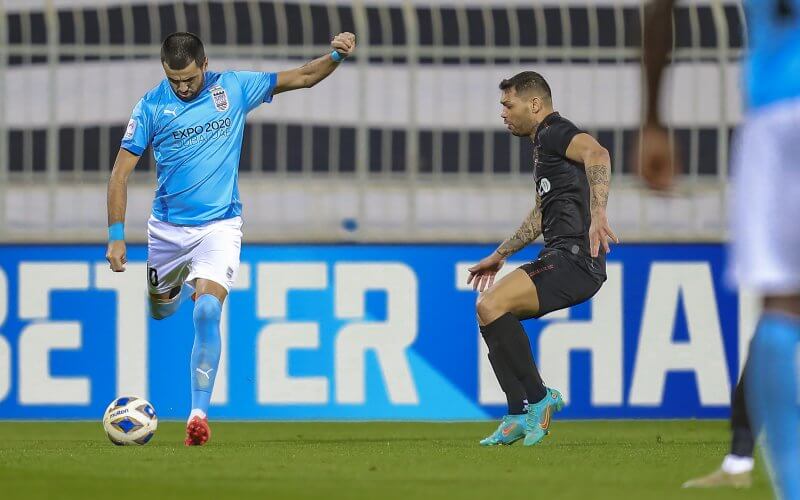 Saudi Arabia’s Al Shabab marked their return to continental football after a seven-year absence with an emphatic 3-0 win against debutants Mumbai City of India in Group B of the AFC Champions League 2022 at the Prince Faisal bin Fahd on Friday.

Ever Banega opened the scoring for Al Shabab in the first half, before doubling their lead in the second, only for Turki Al Ammar to round off the night with his effort to bag all three points.

The Saudi side wasted no time in taking the game to their opponents, and inside two minutes goalkeeper, Phurba Lachenpa was forced into making his first save after Hattan Bahebri broke free down the left and squared for Nawaf Al Abid whose left-footed effort was rescued by the tip of the Mumbai City goalkeeper’s gloves.

Halfway through the opening period Al Abid was presented with a golden chance to open the scoring when he was sent through on goal by a sublime Carlos pass, and he attempted a dinked finish past the goalkeeper, but his effort passed just wide off target.

Al Shabab thought they had opened the scoring in the 28th minute when Bahebri’s shot from the edge of the box had two deflections before falling for Ahmed Sharahili with the goal at his mercy, but the center-back fluffed his lines from a few yards out.

Ever Banega scored his first-ever AFC Champions League goal to give the Saudi side the lead nine minutes before the break. The Argentine stepped up to send Lachenpa the wrong way from the spot after the Mumbai City goalkeeper had brought down Carlos inside the box.

Lachenpa continued his heroics after the break, denying Carlos a certain goal after the Brazilian was set up by a Banega through ball, but the Indian goalkeeper produced a fine save with his feet.

Al Shabab doubled their lead in the 68th minute after a nice passing exchange between Al Abid and Abdullah Al Jouhi saw the latter pull back for Banega who controlled and calmly finished from the edge of the area for his second of the night.

Substitute Turki Al Ammar made it three for the Riyadh-based side with 13 minutes to go after he got on the end of a Fawaz Al Saqour-cross from the right foot, finishing in style with the outside of his left foot to extinguish any doubts.