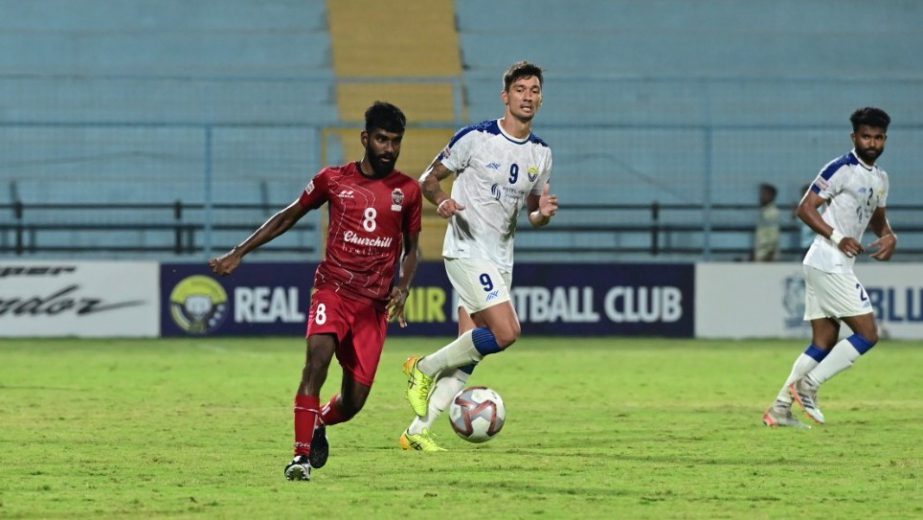 Kingslee Fernandes netted the winning goal for the Churchill Brothers FC Goa in the dying moments as they edged past Real Kashmir FC to record their fourth victory of the season in the Hero I-League, lastnight, at the Naihati stadium.

Real Kashmir and Churchill Brothers FC Goa began the final Hero I-League encounter of the day on the backline, with both clubs relying on their defensive power to deny one other any scoring opportunities. Churchill Brothers played a possession-based style of football and were prepared to wait for Real Kashmir to make a mistake.

During the first 30 minutes of the game, Churchill Brothers had more ball possession, but Real Kashmir tried more shots. However, Real Kashmir were not able to break the deadlock as most of their shots went wide while a couple were blocked.

RKFC defender Ponif Vaz was the first player to get a booking as he was handed a yellow card in the 28th minute for a foul. Churchill Brothers were awarded a free-kick from outside the area a minute later, but Komoron Tursonov was unable to deliver from the set piece.

The first big chance for Churchill Brothers came in the 34th minute, when Bryce Miranda came close to breaking the deadlock but was stopped by Bilal Khan’s world-class save. Six minutes later, Tiago Adan attempted a thunderous shot from an acute angle but he was unlucky as his shot hit the crossbar.

As the first half came to a close, both teams upped the intensity in their pursuit of the game’s first goal. Three minutes were added after the end of regulation time but it was not enough to break the deadlock.

Churchill Brothers started the second half as the dominant side as they kept possession of the ball while playing out from their half of the field.

Kenneth Ikechukwu took a shot in the 66th minute after being set up by defender Lamgoulen Hangshing but he failed in finding the back of the net.

The game was perfectly poised at 0-0 with less than 10 minutes to go in the regulation time as the two sides made several unsuccessful attempts with the hopes to score the opener. Bernard Yao had the perfect chance to score the winning goal in the 83rd minute but he missed a sitter from a close range.

Kingslee Fernandes finally scored the winner for Churchill Brothers in the 90th minute as they collected three valuable points and moved to the sixth spot in the Hero I-League points table.