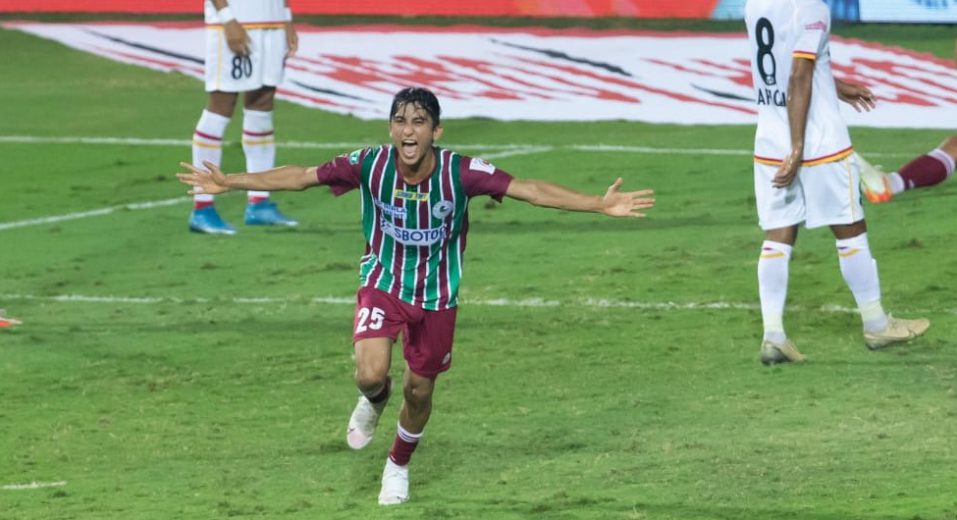 The 381st Kolkata Derby kicked off with much hype and both teams played intense football right from the first whistle to earn bragging rights. SC East Bengal drew the first blood in the 56th minute. ATK Mohun Bagan coach Juan Ferrando took a bold decision and took Deepak Tangri out of the game in the 61st minute and introduced Kiyan Nassiri.

Being the son of a renowned legend, there were expectations and challenges for Kiyan and he easily overcame them. The new Starboy of ATK Mohun Bagan scored the first goal in just 3 minutes off the bench. He then scored twice in injury time as ATK Mohun Bagan completed the 100% record in derby wins this season.

Jamshid Nassiri played football at the youth level in Iran, but professionally he played for East Bengal and Mohammedan Sporting when he moved to India in 1979. During his studies at Aligarh Muslim University, he and his mate Majid Bishkar were spotted by East Bengal scouts got recruited by them. He was a lethal forward for East Bengal and was one of the best overseas players to have played in India. He scored over 70 goals for Red and Golds. Only 12 more players have managed to score more than him in the history of East Bengal. He also represented Mohammedan Sporting as a player and managed them in 2003.

Kiyan was born on 17 November 2000 in Kolkata to Iranian father Jamshid Nassiri and Indian mother Suzanne. He was good at almost every sport but at an early age, he fell in love with the beautiful game. He started his youth career with Mohun Bagan and participated in the Nursury League. He then joined Calcutta Football Club and later represented Mohammedan Sporting. In 2019, he rejoined Mohun Bagan’s Under-19 side. Under coach Joe Paul Ancheri, he made a name for himself during the 2019 Zee Bangla League. His impressive performance caught the eye of the then Mohun Bagan coach Kibu Vicuna, who later promoted him to the senior team for their 2020 I-League season.

He came in as a substitute and made his senior debut on 1 March 2020 against TRAI FC, which Mohun Bagan won 3–1. He won his first silverware with Mohun Bagan in 2020 when they became the I-League champions.

After the merger, ATK Mohun Bagan retained Kiyan and he was named in ATK Mohun Bagan’s 22-man squad for the Inter-Zonal Semi-Finals against Uzbekistan’s FC Nasaf in the 2021 AFC Cup. This season, he played only one match before last night in the Hero ISL. Kiyan has made a total of 3 appearances for ATK Mohun Bagan, but that could change after last night’s heroics.

Resemblance with his Father

Like his father, Kiyan is also a forward but more of a “fox in the box”. Last night, he showed glimpses of his abilities and what he can do even with the little & tight spaces. He has trickery and pace and more importantly, it is in his genes.

With Kiyan’s brilliance last night, he became only the 5th player in the history of the Kolkata derby to score a hat-trick after Amiya Deb in 1934, Asit Ganguly in 1937, Bhaichung Bhutia in 1997, and Edeh Chidi in 2009.

Furthermore, he became the youngest player to score a hat-trick in Hero ISL. With this achievement, he has also become the second-youngest player to score a hat-trick in the Kolkata derby at the age of 21, Bhaichung still holds the record for being the youngest when he scored for East Bengal in the 1997 Federation Cup at the age of 20 years and 211 days. 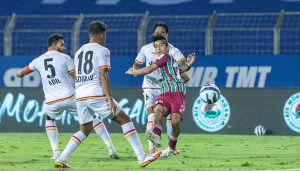 What the future holds for the new ATK Mohun Bagan prodigy?

Jamshid expects Kiyan to appear in the national team colors soon, but he also wants him to stay focused with ATK Mohun Bagan for now. Jamshid expressed his joy and told Anandabazar, “I am very happy. He changed the color of the game. I am proud”. “I want him to play for India one day. Let him play for the team and get success first”, he concluded.

Like his father, Kiyan has a lot of potentials to become a household name and last night’s feat could definitely mark the beginning of a new era for him.

Also Read: Derrick Pereira: Luck hasn’t been with us throughout this season

Derrick Pereira: Luck hasn’t been with us throughout this season
Hyderabad look to consolidate lead at the top against shaky NorthEast United