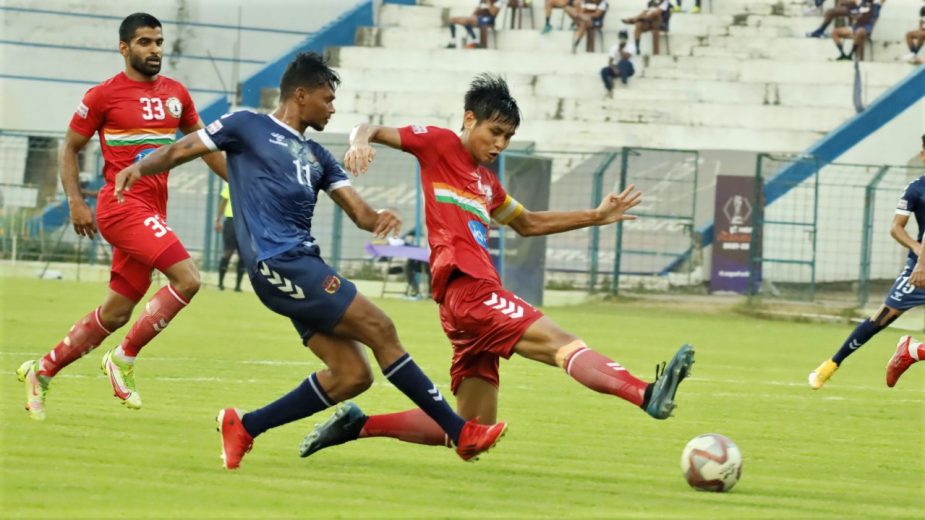 Kenkre FC put on a monumental show to log their maiden Hero I-League 2021-22 win with a comprehensive 3-0 win over Sudeva Delhi FC at the Kalyani Stadium. Three second half strikes not only meant seeking revenge of the loss they suffered in the earlier phase but also shrug off the 10 losses they endured so far and instead open up a new chapter of their presence in the league.

Defensive errors by Sudeva Delhi led to Akeraj Martins profit with an angled finish, Vijay Nagappan slotted off a deflection and Kynsailang Khongsit intelligently converging on a back-header and score with just him and the open goal in sight.

Sudeva Delhi began doing the early running were territorially dominant. As a result, Kenkre FC played defenders for most of the first ten minutes of play.

As the game progressed, Sudeva Delhi had Lungkim Khongsai log the first attempt on goal. An ambitious right-footer from just outside the box, was not the best effort but the intent certainly converted Sudeva Delhi’s effort on the field into keeping Kenkre FC on the alert.

Past the ten-minute mark, Kenkre, now a settled unit by slowing down the pace of the game had the best attempt. A slow build up from the back had Kiran Pandre find Ranjeet Pandre in the clear mid-way into the Sudeva half. Ranjeet was quick to combine with Siddharth Colaco, which left a fast-moving Ranjeet in control. Moving ahead in a flash, Ranjeet got past Pulkiitveer Choudhary and Vanlalzuidika Chhaakchhuak and a fast-retrieving skipper Sairuatkima only to end up spraying his attempt wide at the second post.

Sudeva, meanwhile, looked threatening from the left wing with Pulkiitveer time and again looping in crosses only to have no takers at the other end and Kenkre FC’s crowded defense standing up to the occasion.

Against the run of play, Kenkre FC almost spelt trouble for themselves. Defender Banpynkhrawnam Nongkhlaw in the most casual approach find himself lose the ball in the box but have goalkeeper Padam Chettri covered the situation.

At the other end, Kenkre FC had Pandre oozing with confidence. Finding space on the right Pandre beat William Pauliankhum to cross over only to have his effort end up in a maze of red legs who cleared the danger.

The Mumbai side had another chance come by. Vijay Nagappan carried the ball deep on the left and did well to find Akeraj Martins with open space on the right. What followed was a Martins cross that Pandre missed heading from handshaking distance.

Nearing half time, Sudeva Delhi had an attempt go wide. Shubho Paul on top of the box after Khongsai set him up was lightening quick to release a right-footer that went close and wide at the second post.

The attempt seemed like a warning as Kenkre FC thereafter changed their luck with two-goals in a span of less than two minutes.

The first goal was a gift that Sudeva Delhi defender Zuidika created for his opponent. A casual back pass to goalkeeper Jha on the left path, resulted in Pandre attacking the ball and ending up nudging to Martins positioned wide. Martins with the opportunity made no mistake driving the ball past the custodian at the second post to make it 1-0.

Two minutes later, Kenkre for the first time took a 2-0 lead off a well-combined move. Substitute Pravitto Raju did well to find Panchal on the edge of the box, who with one touch released to find Vijay Nagappan just inside the box. Nagappan controlled moved a step to finish off his attempt which went off Zuidika.

Sudeva Delhi seeking to reduce the margin pushed high and, in the process, conceded their third goal four minutes into injury time.

The goal was a result of persistence. Khongsit, chasing a long ball pumped by Kenkre FC substitute Ali Azhar Delhiwala, capitalised on a feeble back-header by Pulkiitveer intended for the goalkeeper. However, what followed was Khongsit managing to get the ball past Sachin Jha’s legs and tapping into the open goal with the custodian stranded.

The win earned Kenkre FC their first full points of the league and the first time they ever scored three goals in a match.