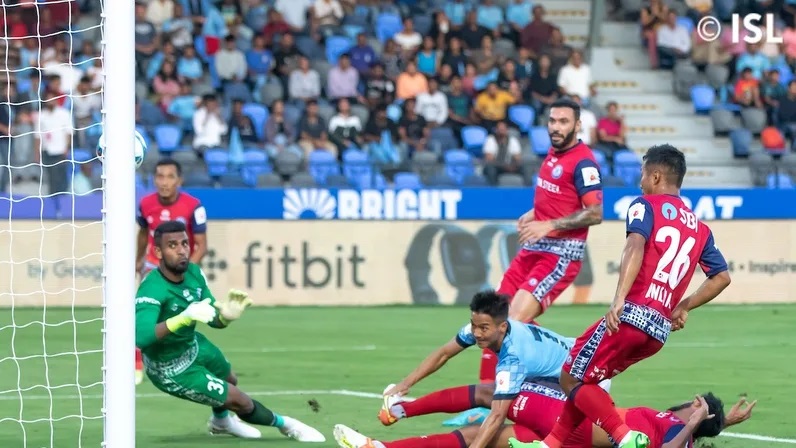 Mumbai City FC dominated possession but were held to a 1-1 draw by Jamshedpur FC in the Hero Indian Super League (ISL) at the Mumbai Football Arena in Mumbai.

Lallianzuala Chhangte put the hosts in front after eight minutes before Daniel Chukwu leveled the score four minutes later. Jamshedpur’s star player from last season, Greg Stewart, was threatening in attack and made the assist for Mumbai’s goal, but was neutralized by his former club for the rest of the game.

After a win in their last game, the Islanders made no changes to their starting lineup for this encounter. The Red Miners made two changes to the side that lost to Odisha FC in the last game. Pratik Chaudhari replaced Peter Hartley at the heart of the defence, and Harry Sawyer replaced Farukh Choudhary at the other end of the pitch.

In the opening stages of the game, both sides tested the waters in the final third. Jamshedpur FC won a corner in the second minute of the game, but Wellington Priori’s ball was too high for any of the players to reach. At the other end, Bipin Singh found Stewart with a brilliant cross from the left flank. The Scot was unmarked, but his header was straight at the keeper.

Eight minutes into the game, the deadlock was broken. Stewart played in a low ball across the face of goal as Chhangte darted towards it to bury it. Four minutes later, parity was restored. Priori’s long throw from the right was flicked on by Sawyer before Chukwu rose highest to head the ball into the top-right corner.

Approaching the half-hour mark, the Islanders were dominating possession. Complacency in midfield allowed Priori to knick the ball off Stewart and feed it through to Boris Singh. Boris’ effort lacked power and was collected comfortably by the keeper. Moments later, Boris failed to control Chukwu’s cross from the left as the Red Miners squandered another chance.

The hosts piled the pressure on Jamshedpur FC as the game touched the hour mark. The Red Miners’ defence was able to keep their shape and kept the Mumbai City FC attackers at bay. In the 63rd minute, substitute Vikram Singh’s looping effort bounced off the bar. Minutes later, TP Rehenesh was quick to deny Stewart’s effort from a freekick.

In the final quarter of the game, Mumbai City FC did not take their foot off the pedal and continued to press Jamshedpur FC into their own half. The visitors dealt with the pressure well and relied on rare counters to move forward. Opportunities fell to both sides in the dying moments of the game, but neither side capitalised on them as the game ended in a stalemate.

The Islanders will travel south to face Kerala Blasters FC in their next game on 28th October, Friday while The Red Miners will return home to host NorthEast United FC on 30th October, Sunday.