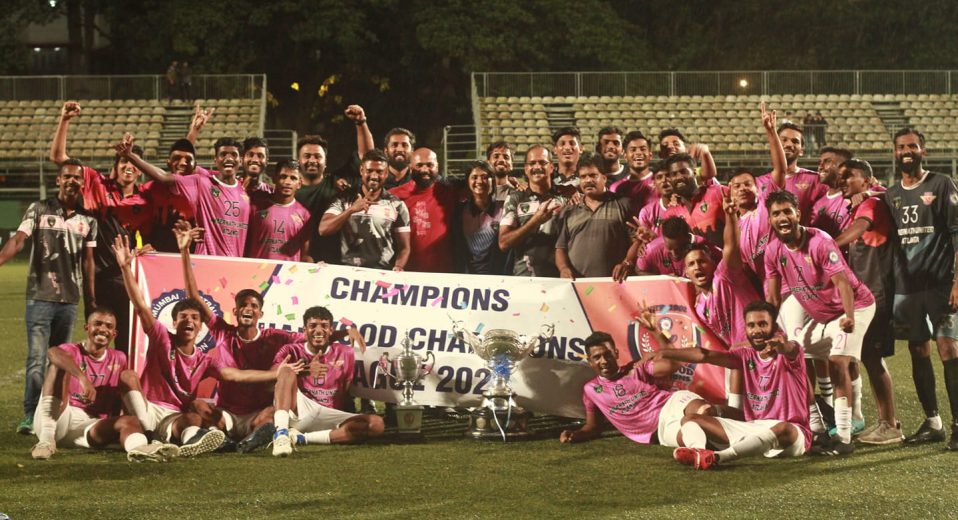 Bank of Baroda fought tooth and nail to finally manage to hold off the Ambernath Utd – Atlanta FC – a club that has been pretty invincible throughout the season – having not dropped a single point until the final game of the season.

The draw in the final league game meant Ambernath Utd – Atlanta FC became the champions of the MFA Harwood Champions league after finishing with 13 points from 5 games. The club had earlier rampaged through the Elite Division campaign with an all-win record to lift the regular-season title.

Despite needing just a point to secure their title, Ambernath Utd – Atlanta FC came out all guns blazing from the first whistle. Seconds after the start, Aaron snatched the ball in the middle from Bank of Baroda’s Aman to surge forward in attack before taking a shot that brought an important save from custodian Yasheel Shah.

This was followed by Vishnu sending in a low cross inside the box after receiving the pass from Allen. However, the ball evaded striker Himanshu Patil as the score remained 0-0. Minutes later another AUA FC attack went in vain, when Nitesh’s cross was headed down by Nishant for Umesh, whose final shot went straight to the keepers’ hands.

In the dying moments of the first half, Alister won a ball just outside the box before cutting in and sending in a shot past the defense. However, Yasheel was once again on top form as he dived to his left to deny Alister the goal. Moments later, Alister had another golden chance to send his team on lead after he brilliantly trapped Aaron’s cross inside the box but his final shot was once again denied by Yasheel between the stick.

It wasn’t until the midway of the second half that the deadlock was finally broken. In the 75th minute, Nitesh Monde took a free-kick from 40 yards out, and his perfectly weighted cross into the danger area was brilliantly headed home by Nishant Shetty, who beat his marker before leaping the highest among the defenders.

Two minutes later, Bank of Baroda struck back from a similar set-piece situation. Hardik Bhatt sent in a looping ball inside the box. Denzil Mascarenhas made a late run before jumping ahead of his marker to head home the equalizer. The goal set up a frenetic final 15 minutes as both sides looked to take the lead.

After some back and forth, the game eventually ended in a 1-1 stalemate but the point was enough for Ambernath United to lift their 2nd title of the season. With 13 points in five games, Ambernath United – Atlanta FC finished top of the league to be crowned the champions of MFA Harwood Champions League.

Himanshu Patil ended the tournament as the highest goal scorer with 6 goals in 5 games.