Indomitable Krida Prabhodhini made its mark at Maharashtra’s Top Tier 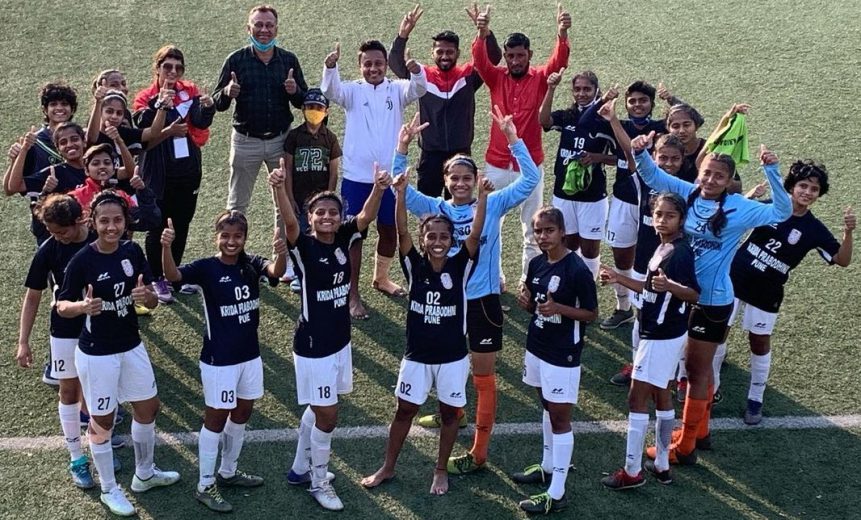 Krida Prabhodhini is a government-run club. The state government took an initiative in the late 90s to form a club where the brightest players from the state who would come through the “Talent Identification” program, would live, study and train under one roof. Keeping this in mind, the club came into existence in 1996. The club’s men’s team has been participating in various tournaments and leagues in Maharashtra. The club started its women’s wing in 2017 with a proposal to discover and nurture the best female talents from Maharashtra. Since 2017, these players have been training at Balewadi and playing for various clubs in WIFA Women’s Football League/IWL Qualifiers.

In 2021–22, the club assembled their squad and opted to play on their own. The Maharashtra government helped them with all kinds of equipment, training pitches and also took care of their accommodation and food at Balewadi.

The technical director of the club, Paresh Shivalkar, fully praised the state government for providing them the much-needed support and said, “The government took care of everything. The support from the state government has been enormous. From the trials to the completion of the league, they provided much-needed help and I, head coach Dhiraj Mishra and the staff are all grateful to them.” 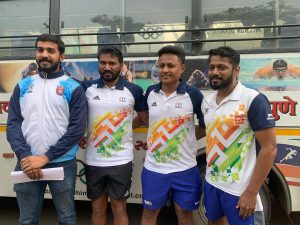 Head coach Dhiraj Mishra heaped praises on Sports Commissioner Om Prakash Bakoria and said, “Bakoria sir is the one who inspired us to put our team in the IWL qualifiers. He always inspires us to take up new challenges.”

When asked about the team, Mr. Mishra said, “Our sole aim is to nurture the talent of Maharashtra. We didn’t bring a single player out of the state. Our squad is full of youngsters and many players in the squad were just 17-18 years old and the oldest player was 20. So it was really easy for them to adopt the coaching methods and formations. We worked on their strength, provided them nutritious food, and also helped them in developing their physicalities.”

“There were some key players who played with their hearts out for the club. Vaishnavi Pawar led our front line and scored many goals. Rani Kadam and Divya Khatal commanded our backline.I was really impressed by 17-year-old Purva Gaikwad and her tactical presence. She has been in India’s U-17 Women’s World Cup preparatory camp. She is a bright prospect and has an illustrious career ahead of her”, he added.

On pre-season and preparation, head coach Mr. Mishra mentioned, “Our core team was already residential. They were training with us here at Balewadi. 15 players from the 22-girl squad came through our system. The other seven players we scouted from trials in Pune. We used to have 2 training sessions per day, we also used to do analysis sessions and meetings. Because it was a first for Krida Prabhodhini, our girls were super excited to play and they were giving their everything in training.”

The league kicked off in late December and Krida Prabhodhini got off to a good start as they won 3 of the first 3 matches. They suffered 2 consecutive defeats in the league in their fourth and fifth matches of the campaign against S.P. Football Academy and Footie First. Then they made a comeback against India Rush before the league was halted due to the COVID-19 outbreak. 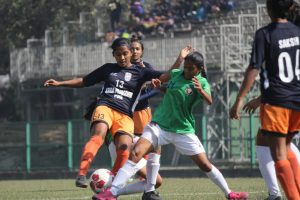 This break was a test for the club and the players, but in the meantime, the Women’s Asian Cup was underway in Balewadi, so the girls got involved in the daily operations of the continental tournament. During this, the club lost some players as they got selected for the Pune University team. So the coaching staff had to come up with something new to keep going. Mr. Shivalkar stated, “We had a lot of discussions and had to make a lot of tactical decisions. We swapped positions of some players. Thankfully we didn’t have any injury concerns, so we worked on the combination and coordination. We took up the challenge and focused on one match at a time.”

The league resumed in February and Krida Prabhodhini won 2 of the remaining 3 matches and finished fourth in the league.

Krida Prabhodhini is already looking towards a bright future with the support of the government. They are coming up with U-12 and U-14 youth teams for girls and the talent identification program will start this year. The club showed a lot of promise in its maiden season in the recently concluded league and the players, head coach, staff, and the management of the club are confident about the future ahead.