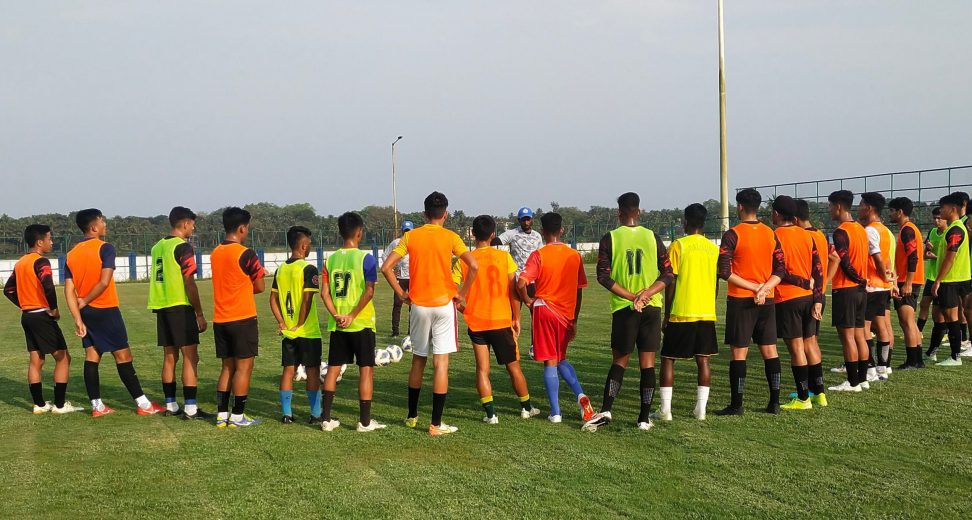 NEW DELHI: The India U-17 Men’s National Team is all set to travel to Bellary, Karnataka, to play three friendly matches against the Bengaluru FC U-18 at the Indian Institute of Sport.

Coached by Bibiano Fernandes, the U-17 boys had qualified for the AFC U-17 Asian Cup earlier this year, and after a brief break, have been in camp over the course of the last month. In addition to the players that were with the team during the AFC U-17 Asian Cup Qualifiers in Saudi Arabia, the team management had also called up a number of players to their camp at the AIFF Elite Academy in Goa for trials.

Head Coach Bibiano Fernandes feels that the friendlies against Bengaluru will be a good opportunity for such players to show their mettle in match conditions.

“We had brought in a number of new boys for trials during our camp in Goa. Although we have monitored their progress over the last month and assessed their strengths and weaknesses, getting to see them playing these matches will reveal more about their mentality,” Fernandes said to the-aiff.com.

“It’s not just the boys who came in for trial, but also others that were with us during the qualifiers, but did not get as many opportunities to play. We will also get a chance to scout the Bengaluru FC players as well. My staff and I want to leave no stone unturned in our search for the best group of players for the AFC U-17 Asian Cup,” he said.

Scouting has been an integral part of Fernandes’ preparation for major tournaments, and the upcoming U-17 Elite Youth League that will comprise of 49 clubs and academies from across the nation will present the National Team coaches with a bigger pool of players to choose from.

“I am really happy that the Elite League will begin next month. It will give us a great opportunity to start scouting players from all over the country, and then we can call them to our camp in Goa and narrow down on the core group of players,” he said. “Different members of my staff will go to different venues like Imphal, Punjab and Kolkata to scout players. I myself will scout the matches in Goa, while also continuing the camp as well. I have also requested the AIFF management to send scouts to all the other venues across India and prepare reports on the promising players that they see out there.

“The league will help a lot, and all the academies and clubs playing against each other will give us a lot of game insights much more than open trials ever will.”

While the technical abilities remain paramount at the top of Fernandes’ list of priorities, attitude and discipline on and off the pitch are also things he is looking for in his players.

“Attitude is one of the most important things. What you want to see in a player is the mentality to not give up on the pitch. Technical and tactical abilities are of course important. If some of these new boys can show that they are at a better level than the Bengaluru boys, that means that we are already on the right path. From there, we can take them forward to the competitive levels,” he said.

“Some players already have that attitude when they join, you need to cultivate that in others. Some have the technical ability, but only used to the pace at the state level, and need to be slowly brought up to the national and international levels over time. We need to take different approaches with different players in this age group,” he said. “Our hope is that we can narrow down to a core group of players by the end of January, and then we can develop them in the camp and in exposure tours.”

Squad for the Bellary Friendlies: