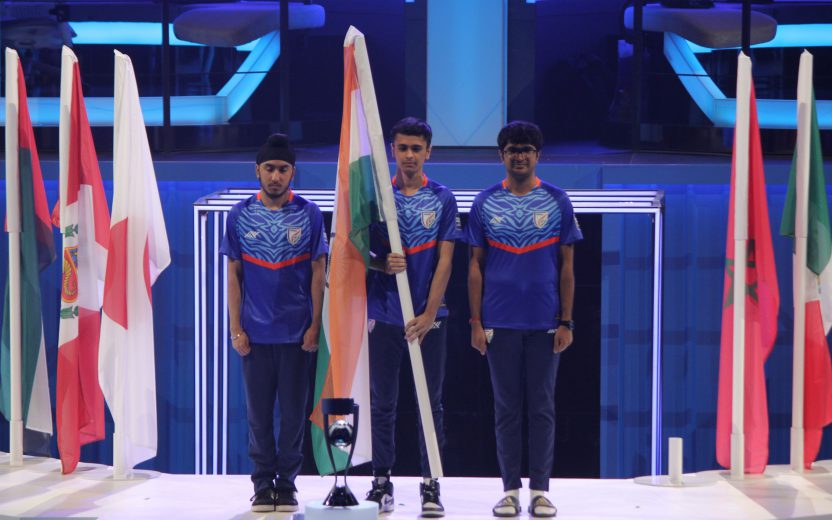 The Indian eFootball National Team notched up their first-ever victory in the FIFAe Nations Cup at the Bella Arena in Copenhagen, Denmark when they defeated Morocco 2-1 in their last match on Day 1.

Clubbed in Group D, along with Italy, the Netherlands, Poland, Mexico, and Morocco, India finished Day 1 on 5 points level on points with Italy, who are ahead on goal difference.

The FIFAe Nations Cup matches are played in a 2-v-2 format, with two of the three team members taking to the controllers to fight it out in the virtual arena, with one mid-game substitution allowed in each match. Charanjot Singh and Saransh Jain started all five games for India on the first day.

India are slated to play the return leg of the group stage later tonight (July 28).

It was a solid start for the eTigers, as they played out a stalemate against Group D top seeds Italy in their first-ever match at the FIFAe Nations Cup 2022. After a promising start, it was a disappointing second match for the Indian eFootball National Team, as they lost to the Netherlands by a narrow 0-1 margin, via a second half goal.

But in the third match, the Indian eTigers squandered a 2-0 lead to eventually go down to Poland 2-3.

Mexico was up next for the eTigers in Match 5, and the two teams probed and prodded at each other in an exciting contest. But the match ended in a goalless draw.

It was finally redemption time for the eTigers in the fifth and final match of the day, when they faced Morocco. With the first half ending in a stalemate, India upped the ante, as Saransh turned provider, while Charanjot netted a second-half brace — first with David Gina, and then with Vinicius Junior.

Morocco attempted to mount their comeback with 12 in-game minutes left on the clock, and did manage to pull one back in injury time, but it was too little, too late.

Charanjot Singh, who netted three goals on the night said: “We were just taking it one game at a time. That’s exactly what we will have to continue doing today,” said India’s top-ranked eFootballer.

Saransh Jain stated: “I am not quite happy with the results but the manner we played pleased us. I think our offensive play was a bit shaky.”

Siddh Chandarana, who did not feature in the matches on Day 1, felt that the eTigers were a bit unlucky in some of the matches, but their focus is now entirely on the upcoming five games. “I think we were extremely unlucky in the games. It could have gone either way in the matches against Italy, Poland and Mexico. But all of that is past. We will have a look at the games, regroup, and try to produce the results in the other five matches,” he said.