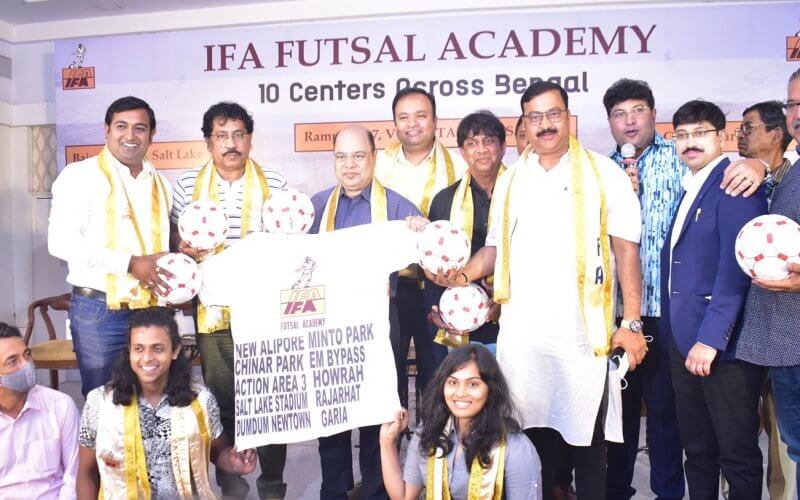 Mr Joydeep Mukherjee, Secretary, Indian Football Association has been taking dynamic steps since 2019 to refine the exclusive concept of “Bengal Football”. According to him, “We are serious about promoting Futsal in Bengal in a professional dimension.”

Mr Subrata Dutta, Sr. Vice President of AIFF said, “Futsal has not been given its due importance by all the State Associations. IFA has taken a commendable development project of Futsal Academies and I am sure Bengal will be the best Futsal playing state in coming years. ”

AIFF CEO -League & Development, Mr Sunando Dhar expressed “ Proindia has been promoting futsal amongst grassroots and underprivileged. Joydeep’s vision with Aparup’s dedication will take IFA Futsal to the next level”.

Rajdeep Nandi, IFA Futsal committee Chairman, who himself is a coach ,is also very hopeful of this upcoming academies.

Meanwhile, Miguel Andres, 5-times UEFA Futsal Championship winner & FC Barcelona Futsal Coach is with the IFA Futsal Academy as the Chief Mentor and said, “My friend Aparup is absolutely passionate about developing Futsal in India. I am always ready to support All India Football Federation or state association like IFA. Bengal has multifarious talents and IFA Futsal Academy is one of the remarkable platforms to start to develop and Football as well”.

Luis Estrela, Senior Women Coach, SL Benfica, Portugal stated, “Portugal is the current FIFA Futsal World Champion and SL BENFICA Methodology is amongst the best in the world. I would help IFA in organizing Futsal Academies .Initially we will have online classes but in future I may visit the academies”.

Futsal is a new concept for the Domestic Coaches. Therefore, Aparup has taken initiative to introduce Joshuah Vaz, AFC Level 2 qualified Futsal instructor as the Head of Coaches Education of IFA Futsal Academy. “He will train our Academy Coaches 1 month before we start our academy. They must be well equipped with the session planners indeed”, Aparup continued.

To support the domestic Coaches, IFA has also partnered with Spanish Online Coaches Education platform. All IFA Futsal Projects has been supported by Proindia.

IFA Futsal Academy will ultimately help in developing more Futsal Players so that we can have our best team to participate in national level competitions on well as domestic leagues. Team IFA hopes to take Futsal to the next level.

IFA Futsal Academy will have 2 pathways for the kids: FUTSAL & FOOTBALL