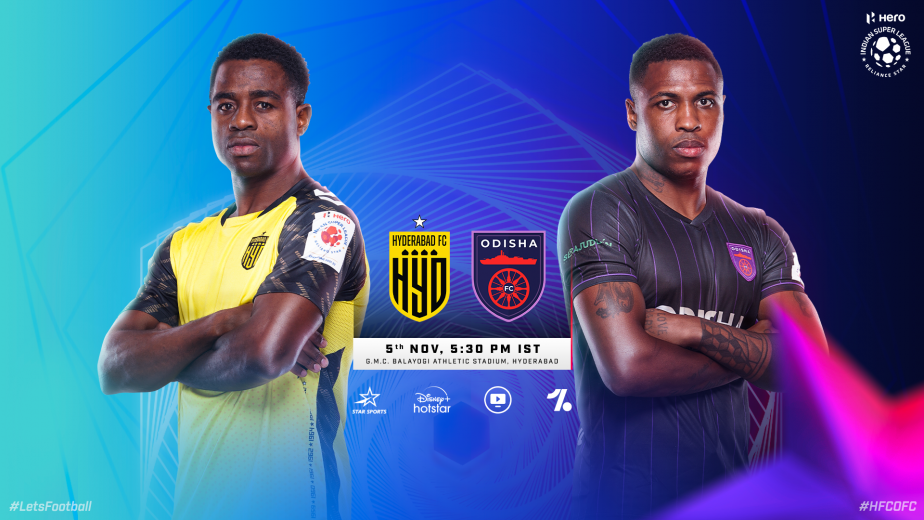 A point separates Hyderabad FC and Odisha FC as they face off against each other in the Hero Indian Super League (ISL) at the G.M.C. Balayogi Athletic Stadium in Hyderabad on Saturday.

The defending champions are looking to extend their unbeaten streak to five games this season while the Juggernauts are aiming for a third win on the bounce.

After the thrilling 3-3 draw against Mumbai City FC in Matchweek 1, Hyderabad FC have kept three consecutive clean sheets. Having picked up ten points so far, the defending champions have made their best-ever start to a Hero ISL season after four games.

Head coach Manolo Marquez has implemented a 4-2-3-1 system in every game this season. Even after losing attacking midfielder Joel Chianese to an injury in the first match, there was no tweak to the formation as Bartholomew Ogbeche dropped a little deeper, enabling Javier Siverio to operate as the sole striker.

Marquez could name an unchanged starting eleven against Odisha FC, but there is a slight possibility that Chianese might start and Ogbeche could get his favoured striking position back. The Nigerian striker would love that as he has scored seven goals and provided one assist in six games against Odisha FC.

“The game will be very difficult. Odisha FC are a very strong side. In my first season here, they [OFC] finished last. Last season they fought for top-4, and I think this year with Gombau, they are playing really well,” said Marquez. “But as usual, we will be a difficult team for them to play against,” he added.

Like Marquez, Odisha FC head coach Josep Gombau does not like to tinker with his system. His team has adapted to a possession-based 4-3-3 perfectly, and that is the same formation and gameplay expected in the game against Hyderabad FC. In all games this season so far, Gombau has not changed his front three.

Jerry Mawihmingthanga and N Sekar are likely to start on the flanks with Diego Mauricio operating as the center-forward. Sekar scored the match’s only goal in their win against BFC while Mauricio is looking to end his goalless spell. The Brazilian bagged a brace against JFC in Matchweek 1 but has failed to score after that.

Despite that, the Juggernauts have managed to get the results they wanted. Gombau is wary of the opponent but understands what his side needs to do to get a positive result.

“It will be a nice game to play. They [HFC] are a very good side and are unbeaten this season. That fact is what makes winning this fixture challenging for us. Both teams have a characteristic gameplay – we like to keep the ball, and they are more direct,” said Gombau. “It is a difficult game but if we do the right thing we can get the desired result,” he added.

The two sides have met each other six times in the Hero ISL. Hyderabad FC have won thrice while Odisha FC have grabbed two wins. The defending champions scored nine goals in two matches against the Juggernauts last season, securing the double over them.