FC Goa return to action in the 2021-22 season of the Indian Super League (ISL) on Friday, January 28, when they lock horns with Jamshedpur FC. The match will take place at the SAG Athletic Stadium in Bambolim, Goa, with the kick-off set to happen at 7:30 pm IST.

This being the Gaurs’ 14th match of the ongoing league campaign, they have a total of seven more games to make a difference in what has been an underwhelming season, to say the least. With three wins, five draws, and five losses, the team from Goa are currently at ninth place on the points table with 14 points.

Ahead of the important clash, Head Coach Derrick Pereira spoke in the pre-match press conference, where he opined that a top-four finish could be ‘tough’ for FC Goa.

“A top-four finish is tough now, but we’ll now take things one match at a time. We’ll keep working hard and giving our best. We’re a team that shouldn’t be at the position where we’re in right now,” Pereira said, before proceeding to speak on Friday’s opponents.

“Jamshedpur FC are a good team overall. They had some very good games as well and have a good style of play.

“On a good day, they look very strong but we need to go in with a mentality of performing to the best of our abilities. We would be looking for loopholes and would try to get a win in tomorrow’s match.”

The tactician also revealed that Glan Martins has been ruled out ahead of the Jamshedpur clash, with an injury.

“Glan Martins will not be available for selection in tomorrow’s game,” the FC Goa head coach informed. “We’re still working his case with the medical team so that he can be back with the team as soon as possible.” 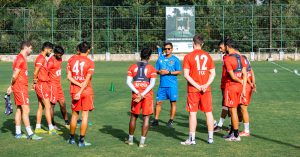 As mentioned, FC Goa are currently at ninth place on the points table. However, the intense competition in the league makes it possible for Derrick Pereira and his boys to still make it to the playoffs, provided they get some wins in the upcoming matches.

As things stand, they are only four points below the play-off spots and only six points separate them from the table-toppers.

A win will help the Gaurs to climb to eighth place. A draw or a loss, on the other hand, will seriously dent their hopes of qualifying for the playoffs for the fifth successive season.

On the other hand, Jamshedpur last played a game on January 11, after which they had been unable to train or feature in matches till recently, due to the virus outbreak. This lack of practice could trouble JFC when they take to the pitch on Friday evening.

FC Goa, meanwhile, are on a three-game winless run. The unavailability of key players and certain results not going their way have put the Gaurs in a spot of bother – but if they manage to take home the three points against Jamshedpur will make the rest of the league interesting once again.