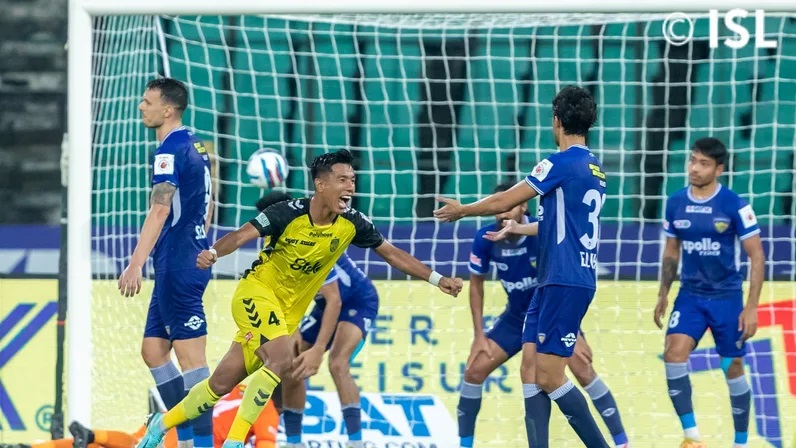 Hyderabad FC returned to winning ways after back-to-back defeats as they beat Chennaiyin FC 3-1 in the Hero Indian Super League (ISL) at the Jawaharlal Nehru Stadium in Chennai on Saturday.

Halicharan Narzary, Chinglensana Singh, and substitute Borja Herrera struck in the second half to push the defending champions back into second place.

Chennaiyin FC made four changes that saw Gurmukh Singh, Vincy Barretto, Edwin Vanspaul, and Abdenasser El Khayati coming in as Vafa Hakhamaneshi, Sajal Bag, and Sourav Das, Jockson Dhas were left out. A couple of changes for the visitors saw Joel Chianese and Halicharan Narzary return to the lineup, as Borja Herrera was benched and Reagan Singh was not in the squad.

Hyderabad FC almost got their noses in front in first-half stoppage time. Nikhil Poojary crossed the ball from the right flank before Fallou Diagne beat Chianese to it. However, a clearance went straight to Narzary, whose shot rattled the crossbar.

Five minutes past the hour mark, the deadlock was broken with a superb strike from Narzary. Hyderabad FC’s short corner routine saw Chennaiyin FC tackle the ball straight into the path of Narzary, who wrapped his boot around it and buried it into the back of the net. Moments after the opening goal, Chennaiyin FC were reduced to ten men when right-back Ajith was shown a second yellow in the 71st minute.

Approaching the game’s final quarter, the visitors doubled their advantage thanks to Chinglensana Singh’s close-range volley. Another corner was not cleared properly by Chennaiyin FC as they only cleared it as far as Chinglensana, who smashed it into the goal from close range in the 74th minute.

Four minutes later, the Marina Machans pulled one back when El Khayati’s cross from the left was headed in from close range by Petar Sliskovic. However, the joy was short-lived as the men in yellow re-established their two-goal advantage seven minutes later. Substitute Borja Herrera picked the ball out of the air at the edge of the box and fired it into the top-left corner.