Coach Education has improved a lot in recent years, and is making a difference, urges Mehrajuddin Wadoo After years of impeccable service to the Indian Men’s Senior National Team including being a part of India’s campaign in the AFC Asian Cup Doha 2022, along with representing a host of illustrious clubs across the country, Mehrajuddin Wadoo decided to hang up his playing boots and put on the coach’s cap in 2018.

Starting out as an Academy coach for former Hero Indian Super League side FC Pune City, Wadoo became the Assistant Coach of Hyderabad FC in 2019, before taking up his current role as Head Coach of Hero I-League club Sudeva Delhi FC.

“Coach education has improved a lot in recent years and that has made a big difference in the level of Indian coaches. We see so many of them at high levels at clubs across the country — some even as head coaches. I hope that one day, one of us will be good enough to take over as National Team head coach,” he said.

“Renedy and I used to be room-mates and we used to always have conversations about taking up coaching after we finished our playing careers,” recalled Wadoo. “Bob Houghton (Former India head coach) was a big inspiration for us and we aspired to be like him. Today, Renedy, Mangi, Steven, Venky (Shanmugam Venkatesh), and Mahesh are all doing well,” he averred.

“All of this is because having played for the national team, they all stay desperate to give something back. I want to be known as a coach who develops young Indian talent,” he stated. 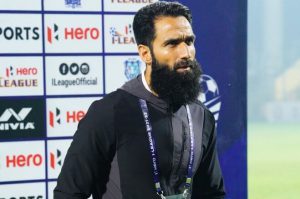 In the last few years, Indian youth teams have played a number of matches and tournaments, at home and abroad, something which Wadoo and his teammates never got the benefit of.

“The number of competitive games they are getting today – at all levels (U-13, U-15, U-17, etc) – is really going to help them in the coming years,” he said. “We used to play a one-off tournament during our days, but these young players of today are benefitting immensely. Playing competitive games as compared to daily training is a completely different prospect. It is bound to be crucial for their career ahead.”

The Srinagar-born Wadoo also reminisced about some of the milestones in his career and even picked out the player he felt gave him the hardest time on the field.

“Scoring the opening goal in the 2005 SAFF Cup final win against Bangladesh, which was my first tournament for India, will always be the proudest moment of my life,” he smiled.

“As for the toughest opponent I have faced, it would have to be (former Churchill Brothers and Mohun Bagan striker) Odafa Okolie. As a defender, I would always feel pressure coming up against him and I’m sure most of my fellow defenders would agree too,” Wadoo maintained.

Also Read: Kerala Blasters edge past SC East Bengal to get back into semis contention