Cagey affair between TRAU and Sudeva Delhi ends in draw 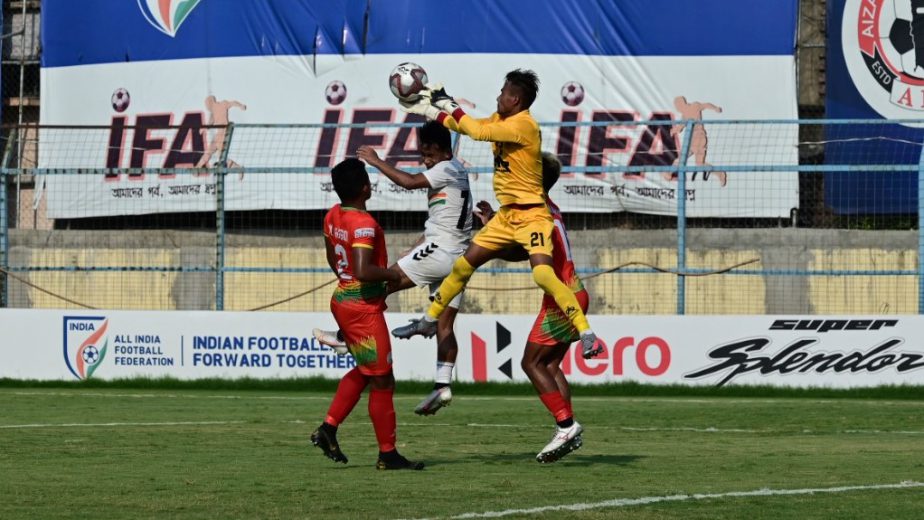 Match number 61 of the Hero I-League 2021-22 season between Tiddim Road Athletic Union (TRAU FC) and Sudeva Delhi FC ended in a goalless draw in the Naihati Stadium on Saturday. Neither side would be too happy with the result in the context of their chase for a Top 7 finish.

Chances were few and far between for either side over the course of the 90 minutes. The game was characterised by an intense physical battle between both sides and resolute defending which saw both defences blunt the attacking edge of their opposition on the day.

At the end, a point each was a fair result for both sides as a tussle for the balance of power on the pitch saw TRAU and Sudeva Delhi cancel each other out.

TRAU FC had the pick of the chances in the first half after a rapid counter attack resulted in Joseph Olaleye playing Fernandinho through on goal in the 37th minute. TRAU FC’s Brazilian import was the favourite to score as he chopped on to his left foot, but Sachin Jha in the Sudeva Delhi goal was not to be beaten as he made the game-saving stop in a 1v1 situation.

In response, Sudeva Delhi made their best move of the match in the 38th minute. A free flowing, ‘one and two touch’ passing move down the left flank took the side from the capital into the final third of the field. As the ball was squared into the box for Sreyas VG, the midfielder just fell short of applying the finishing touch to an impressive attacking move.

TRAU FC’s dangerous duo of Joseph and Fernandinho nearly combined to good effect again in the 40th minute. Joseph made up the yards in rapid fashion as he carried the ball over 50 yards with a lung busting run before laying the ball off to Fernandinho inside the box. Fernandinho stumbled at the crucial moment and tripped on the ball, letting the chance go begging.

Changes were in order for both sides in the second half, and one such change from coach Mehrajuddin Wadoo nearly paid off for Sudeva Delhi in the 69th minute.

TRAU defender Gerard Williams made a blunder to begin with as he failed to bring a regulation long ball under his control. The mistake allowed Shubho Paul to bear down on goal one-on-one with the keeper. Paul was on the verge of making instant impact barely minutes after coming on to the pitch, but Williams made the recovery in the nick of time to deny Paul a chance to finish.

The last big chance of the match fell to TRAU FC in the 82nd minute. After a promising team move, Fayazuddin played a cross in from the left flank, which was met at the back post by Milan Singh. The substitute should have done better with the chance as he arrived into the box completely unmarked. The chance went begging once again as Singh failed to keep his first-time effort on target.