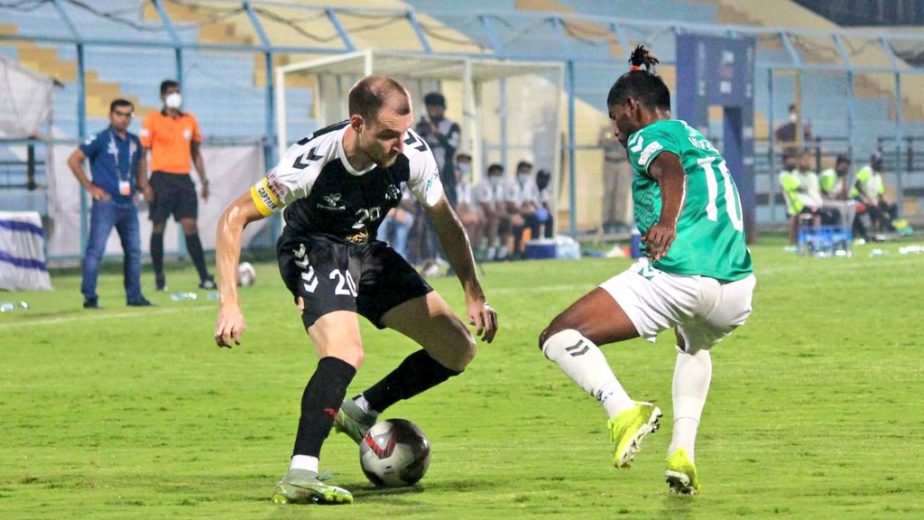 A lot of positives for newcomer Kenkre as they lost to Mohammedan Sporting Club by a solitary goal.

Seeking a response to the last 3 losses, Kenkre coach Akhil Kothari made four changes to the starting line-up which lost to TRAU FC on 16 March 2022. Cameroonian defender Zacharie Mbenda made his first start for the club, while Jishnu, Suraj, and Siddharth also found themselves in the starting line-up.

The Kolkata Giants started the proceedings. In the opening minutes, the Mohammedan SC forward tested Kenkre’s defense but found no open space and failed to threaten their backline. Zacharie’s presence added stability to Kenkre’s defense as he started commanding the backline from the very first minute.

In the 9th minute, Kenkre did well on the attacking front as they earned back-to-back corners but failed to capitalize on them.

In the 15th minute, Mohammedan’s Nikola Stojanović took a stinging shot which was palmed away by Kenkre goalkeeper Padam Chettri. Padam made himself big on the occasion and made a brilliant save to deny Mohammedan open the scoring.

In the 40th minute, Padam Chettri was called into action again as he made another fine clearance from a Mohammedan free-kick and tossed the ball away.

In the 45th minute, Vijay took a shot just outside the box which was collected comfortably by the Mohammedan goalkeeper.

The first half ended in a stalemate and Kenkre put up a robust defensive display as they did not allow Mohammedan to score. 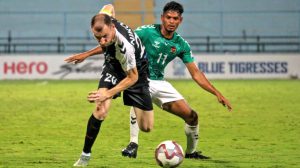 In the second half, the Mumbai-based club resumed where they left off and the same story continued. The new boys of the I-League were easily putting the big boys of Kolkata Maidan into frustration.

In the first quarter of the second half, Kenkre showed little promise in the attack as well. They were making some counter-attacks but lacking the final touch.

In the 61st minute, Mohammedan SC got a free-kick just outside Kenkre’s box. Andjelo Rudović took a shot but Kenkre goalkeeper Padam saved it with ease.

In the 72nd minute, Mohammedan’s Marcus Joseph scored the opener with a header, and the resilience of the Kenkre defense was broken.

Two minutes later, Kenkre FC’s Ranjeet put the ball into the back of the net but the linesman raised the flag for offside. Kenkre pushed for the equalizer with some quality attacking moves in the later stages of the game, but were unlucky.

The referee blew the final whistle and the game ended in another defeat for Kenkre. Kenkre can take many positives from the game as they put up a great performance against the mighty Mohammedan SC.

Mrs. Nita Ambani: “With live chants of fans at the stadium, football will be the real winner”
7 new faces as Stimac names final list of 25 for friendlies in Bahrain