KALYANI: Sudeva Delhi FC will look to extend their three-game winning streak when they face Aizawl FC in the last game of their debut campaign in the Hero I-League. The kick-off is slated for 4.05 PM IST at the Kalyani Municipal Stadium in Kalyani, West Bengal tomorrow (March 25, 2021), and the match will be broadcast on 1Sports, whilst being streamed on their Facebook page.

The sides were held to a 1-1 stalemate when they met back in match week 7 when Alfred Jaryan’s second-half strike cancelled out Kean Lewis’ goal in the first half, leading both teams to share points. The Yan Law-coached side dominated possession, chances, and even missed a penalty kick in the second half as faulty finishing let them down.

However, since then, Aizawl have looked a completely different side — scoring 12 goals in six games as they have gone on to stay on the top of group B with 21 points after 13 games. A victory against Sudeva would extend their supremacy in the group and give the fans something to cheer about at the end of the campaign.

Speaking at the pre-match press conference, head coach Yan Law said, “It is the last game of the season. The preparations are always going well. The boys have been working hard throughout the season. We want to end the season well. Last time we drew against Sudeva, but this time we are going for all three points and want to give the fans something to cheer until the next season.”

“We have been playing good football, but only six teams were going to qualify for the championship round. We have conceded the least number of goals, we have many goal scorers and a lot of Indian players — a lot of positives takeaways. I am really proud of this team.”

“We have been studying Sudeva Delhi’s games. The boys are working hard. We have done our homework against them. They are a good team, dominating a few matches. Both sides have been playing well, are in good momentum, and this should set us up for a good but tough game of football,” Law added.

Midfielder Alfred Jaryan said, “We are going to approach the last game like every other game. It might be the last game but is very important. As the coach said, we need a positive result for the fans. It is good for any club to end the campaign with a win. They are a good team, but we are a better side, so we need to win this game by all costs.” 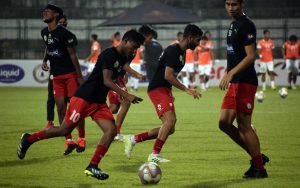 Sudeva Delhi have had a memorable debut campaign in the Hero I-League and will like to finish the campaign with a four-game winning streak. The side from Delhi has put up some good performances against stronghold teams like Kashmir, Aizawl, Punjab, and Chennai. They sit second in Group B with 18 points and will be hoping for a win against Aizawl, which would put them equal on points with the People’s Club.

Speaking at the pre-match press conference, assistant head coach Pushpender Kundu said, “It has been a fantastic season, both for the team and me. I would like to thank a few people for giving me and many young players from Delhi, North-East, Maharashtra, and other parts of the country the opportunity to play at such a high level of football.”

“It has been a good experience for me working with a talented coach like Chencho Dorji. Being a Delhite, it has been a huge responsibility for me to coach this club. Tomorrow, we will be playing our last game, and we want to finish it with a victory.”

Aizawl are among the brightest teams in the league. I don’t know why they were unable to qualify for the top-six. They play possession styled-football with a high press. But, we are ready. We drew with them once, and now want to get all three points from this game,” Kundu added.

Speaking about his season, young forward Shubho Paul, said, “Sudeva Delhi gave me a platform to play in the Hero I-League. I am glad that I was able to score two goals in this campaign and contribute to the team with my performances.”

Also Read:Young India gear up for ‘terrific challenge’ against Oman

Young India gear up for ‘terrific challenge’ against Oman
Pride at stake, Chennai City and NEROCA aim to finish with three points