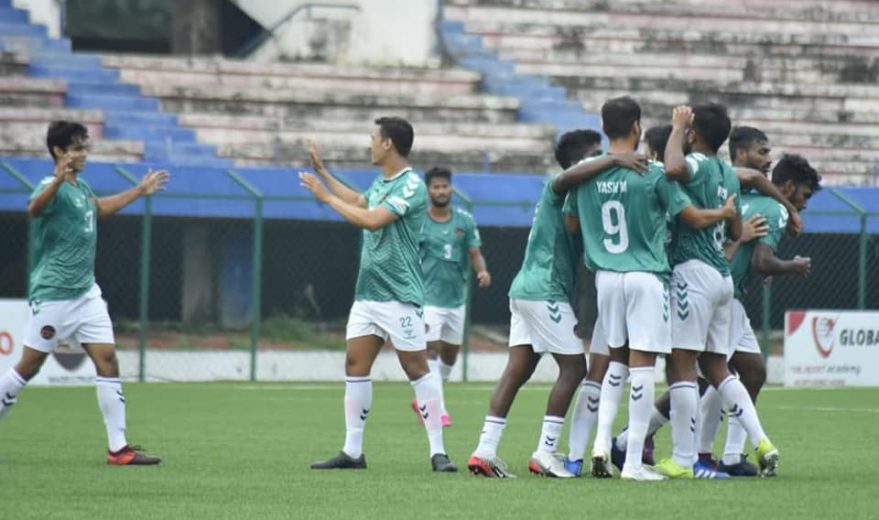 In a hard-fought encounter, a late strike from midfielder Pravitto Raju gave Kenkre FC all-important three points to keep their I league Qualifiers campaign on track.

Meanwhile, this loss has put an early dent on the Madhya Pradesh side’s bid to qualify for the Hero I-League 2021-22 with two tough games coming up next.

The game began with Kenkre FC making early inroads through Mdan Maharaj’s defense with the first big opening came down the left-wing with striker Ranjeet Singh getting the better of the opposing full-back before squaring a cross for an onrushing Varun Mathur, whose shot went inches wide of the post.

Kenkre continued to threaten Madan Maharaj’s defense through their excellent wing plays but failed to find that the much-required finishing product in the final third. Around the half-hour mark, Ranjeet swung an excellent low cross which was met by diving Pravitto Raju however he failed to keep the ball on target as the chance went begging. In the 33rd minute, Azfar Noorani carried the ball down the left wing and produced another low cross aimed for the edge of the six-yard box which was met by the onrushing Aravind Rajan but he missed his mark by a whisker.

In the 42nd minute, Madan Maharaj had an excellent chance to go 1-0 up when William Twala found himself unmarked inside the Kenkre box, however, Kenkre goalkeeper did well to come out of his line, narrow the angle the block the Madan Maharaj striker’s shot to keep the score 0-0.

The second half began with Kenkre once again taking the charge early on. An excellent low cross from the right-wing meant Azfar Noorani was poised to tap the ball home, only to be denied by a heroic last-ditch tackle from Abhishek Das. In the 61st minute, MMFC nearly capitalized on a loose back pass by Suraj Singh Negi, as Biren Rai chased the ball and nearly got his foot to it to take it away from the keeper and be through on goal, but the danger was expertly cleared by goalkeeper Tenzin Samdup.

In the 74th minute, a Kenkre FC free-kick routine ended with a missed chance as players collided over each other only to miss the loose ball inside the box which was eventually cleared away by MMFC defense. However, the clearance soon turned out to be a counter-attacking move as Striker Biren Raj found himself on a 1on1 situation with Kenkre keeper. However, Tenzin maintained his composure well coming off his line and to deny Biren Rai a shot on goal.

MMFC were left to regret their missed opportunities in the 84th minute as Kenkre FC finally broke the deadlock through Pravitto Raju. After combining effectively and producing a high cross from the right-wing, Pravitto outjumped MMFC center back Loveday and sent a looping header over goalkeeper Shayan Roy, who was caught in no man’s land.

The match ended at 1-0 to Kenkre FC as the club from Mumbai will look to build on the momentum from this result. They next face Delhi FC on 20th the only team that has managed to beat Kenkre FC so far. Meanwhile, Madan Maharaj face off against Rajasthan United on the same day.