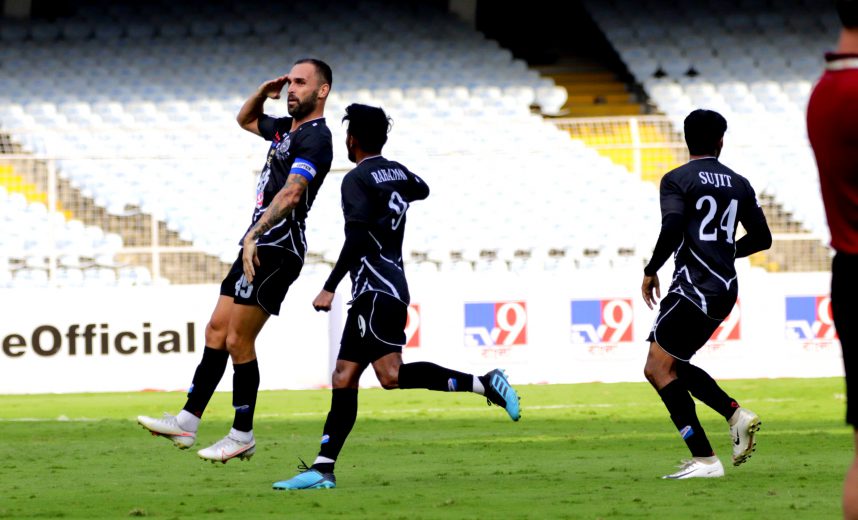 KOLKATA: Pedro Manzi’s brace — a long-range stunner, and a header — helped Mohammedan SC pull off a miracle as the Black Panthers inflicted Real Kashmir’s first defeat of the Hero I-League season, beating them 2-0 despite being down to 10 men at the VYBK Stadium in Kolkata, West Bengal on Sunday (February 28, 2021) to book a top-six spot in the Hero I-League with 16 points from 10 matches.

After skipper Kingsley Eze was sent off in the first half, Pedro Manzi proved to be the trump card for Mohammedan as he scored two goals in the space of five minutes in the second half to lead the Black Panthers into top half qualification.

Despite dominating possession for much of the first half, a listless performance in the attacking department let Mohammedan SC down again, in the first half. Even new signing Pedro Manzi could not work his magic in a half where Mohammedan had almost 80 per cent ball possession. The Black Panthers could only muster half-chances and Vanlalbiaa Chhangte proved to be a live-wire in the final third.

His shot in the 16th minute came agonisingly close to handing Mohammedan the lead after he was released onto goal by Pedro Manzi. However, Chhangte from a very tight angle, could only help it away from the goal.

Meanwhile, Real Kashmir enjoyed sitting deep and tried to attack through long balls for Lukman Adefemi and Mason Robertson up front. The Snow Leopards, boasting one of the best defensive records in the league, played as though they had shut-shop for any Mohammedan attack – committing bodies in front of the ball and comfortably keeping their opponents at bay.

Chhangte once again came close in the 25th minute after Rahman’s free-kick looped over the Real Kashmir defensive line and found an on-side Chhangte. The forward went for the spectacular in the form of a bicycle kick but failed to force the goalkeeper into conceding. However, one long ball from the Real Kashmir defence turned the game around in the 34th minute when Lukman Adefemi, straight onto the goal, was hacked down by Kingsley Eze. Eze was shown a straight red card as the Black Panthers were reduced to ten-men.

Real Kashmir could have taken the lead in the added time of the first half, but Adefemi’s through ball to Mason Robertson in the box was intercepted heroically by Rahman. After the half-time scoreline read goalless, the Snow Leopards came out from the tunnel spurred and almost took the lead in the 48th minute. Ralte’s cross from the flank found an unmarked Pawan Kumar in the back post, but Pawan could only head it into the side netting as Mohammedan survived. In the 61st minute, a half-chance for Haroon Amiri was saved well by the opposition custodian, after the defender tried a half volley on the turn from inside the box.

The best chance of the match fell to Pedro Manzi in the 70th minute. After Real Kashmir’s goalkeeper had made an uncanny save from a long shot, the ball fell to Manzi who was inches away from the goal. Despite having a clear shot at the goal, Manzi went for the spectacular and missed from close range.

But all it took for Pedro Manzi was a moment of pure genius to announce his return as he exorcised his miss before. In a deja vu of his goal in the 2018-18 edition of the Hero I-League when he was playing for Chennai City FC, Manzi once again delivered a goal for the highlight reels. The forward saw the opposition goalkeeper off his lines and shot from inside his own half to hand Mohammedan the lead in the 74th minute.

In the 79th minute, Pedro Manzi headed home from close range after a cross from the right flank found him unmarked inside the box. With a two-goal advantage, Mohammedan committed bodies in defense and eventually pulled off a miracle as the full-time scoreline read 2-0 in the Black Panther’s favor.