“My philosophy is to win each game”, says Gokulam Kerala Head Coach Vincenzo Alberto Annesse on ‘Durand Talks’ ahead of 130th Durand Cup 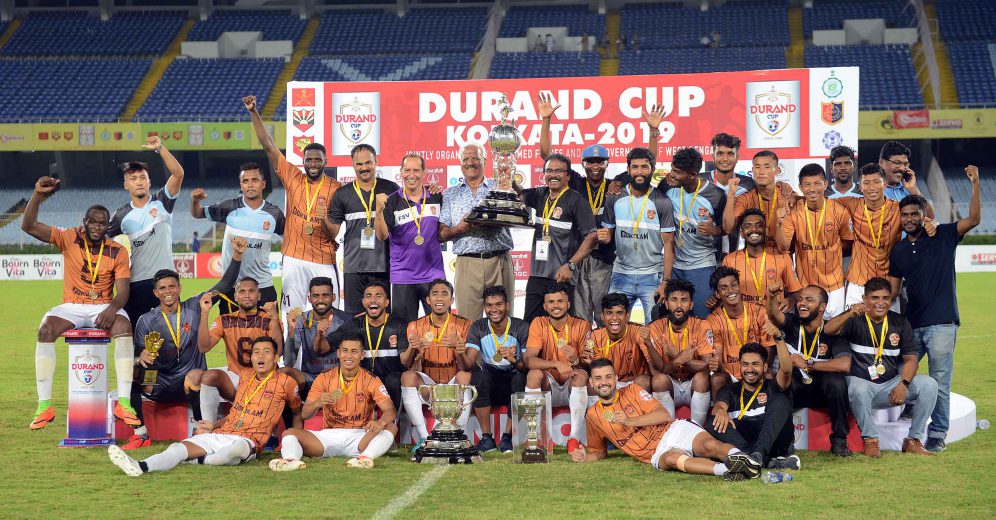 KOLKATA, August 28, 2020: For I-League winning Head Coach Vincenzo Alberto Annesse, anything short of one-hundred percent is not enough. Surrounding the 36-year-old Italian from Bury is an aura of confidence, expectation and intensity – all put together to culminate in a progressive, exciting brand of football which fans of the Malabarians have now come to expect of their team. Speaking ahead of the 130th Durand Cup on the tournament’s own talk show titled “Durand Talks”, Coach Vincenzo speaks on the importance of the tournament, his side’s preparations ahead of the curtain raiser, what we can expect of them, and more.

Expectations have never been higher for Gokulam Kerala – now the reigning I-League Champions and also the current Durand Cup holders. With great accomplishments come greater challenges and that is exactly what Gokulam will have to deal with this season, if they are to scale greater heights. The I-League winners have qualified for the AFC Cup group stages this year, thus making them the first club from Kerala to participate in continental football. Naturally, expectations are sky high.

Coach Vincenzo sees the upcoming Durand Cup as the perfect platform for him to prepare his entire squad for their fast-approaching I-League and AFC Cup endeavours.

“We know very well that preparation for this season will be hard, because we have a lot of expectations. Especially for AFC Cup which we will be playing this year. We start the season with Durand, which will be good preparation for the I-League campaign. It will provide a good opportunity to establish good chemistry between our players”, he said during the show.

Preparations for the new season have been difficult for Gokulam in an unprecedented way, owing to the pandemic and second-wave situation in India. The coach weighed in on how his side have made the best out of a very bad situation.

“We started on 2nd August. We have been playing friendly games with local teams. There is a lot of talent over here in Kerala, it also gives us an opportunity to watch other players, and also to help us field a good team tactically in preparation for the season”, he said.

He also gave an insight into how ‘virtual training’ has been for his side. He added, “We are coming back after five months. Players weren’t able to work out properly during this time. The COVID situation in India was so bad for the last four-five months.

“We have tried to maintain fitness via video call, group calls. We have been in consultation with Prof Garcia – our physical coach to maintain a regime for our fitness at a high level. We also did some tactical exercise. Day by day we have been trying to improve ourselves but first, most important for me is the physical aspect. Because 4-5 months without football isn’t easy.

The Durand Cup commences on 5th September, but Gokulam won’t be playing their first game until 12th September. They have been drawn into Group D alongside Hyderabad FC, Assam Rifles and Army Red Football Team. Speaking on what we can expect of Gokulam, Vincenzo smiled with his usual confident demeanour and said, “We will see a lot of goals.  If you watch our games, you will see we always score goals. I am very emotional on the bench. I don’t play for a draw. I will love for us to score a lot of goals (in the tournament). In the I-League last season, we scored 31 goals with 10 different goal scorers.”

The core of this Gokulam Kerala side has changed drastically since their maiden Durand Cup win. As a matter of fact, only 11 players remain from Gokulam’s I-League winning squad from last year. The Durand Cup presents Coach Vincenzo with the perfect setting to try and experiment a few combinations.

Can they repeat their success? The answer was straightforward and expected: “I believe we can win this trophy again.”

The Durand Cup returns for its 130th edition on Sunday, September 5 at the Vivekananda Yuba Bharati Krirangan (VYBK).

Also Read: All you need to know about Regional Premier League