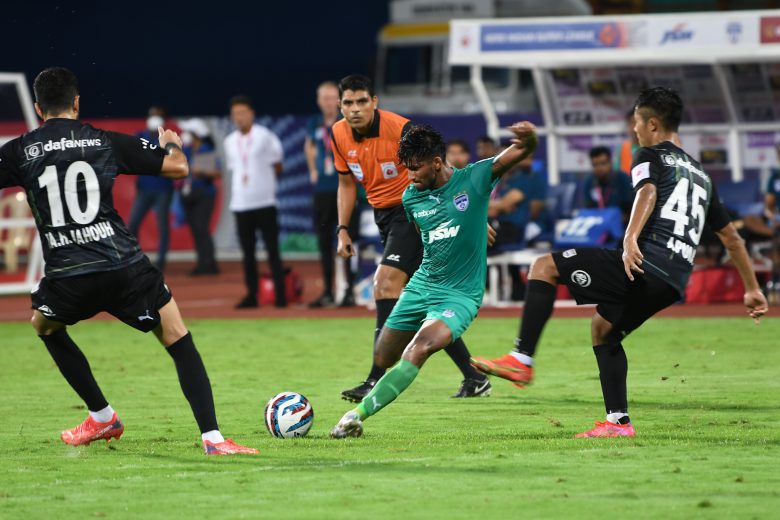 Mumbai City FC managed to defeat Bengaluru FC thanks to a 3-1 scoreline in their latest Indian Super League 2021-22 assignment at the GMC Athletic Stadium in Bambolim, Goa on Saturday.

Igor Angulo (9’) opened the scoring on the night by converting a penalty with immense composure. Cleiton Silva (20’) then scored with a sublime long-range direct free-kick bringing the game to equal terms. Mourtada Fall (54’) rose the highest to head the ball and send his team into the lead again. Ygor Catatau (85’) got on the scoresheet after coming on from the bench to seal the win.

Mumbai City FC was unchanged from their incredible win against ATK Mohun Bagan. As for Bengaluru FC, Jayesh Rane came back into the starting lineup. Cleiton Silva and Prince Ibarra started together for the first time this season as well.

The game got off to an electric start with Cleiton Silva hitting the crossbar with a powerful volley. On the eighth minute mark, BFC’s Alan Costa seemingly handled the ball inside the box during an aerial battle with Mourtada Fall. Referee Pranjal Banerjee pointed towards the penalty spot and Igor Angulo made no mistake in converting the spot-kick for his fourth goal of the season. Suresh Singh Wangjam received a yellow shortly after for a poor challenge.

On the stroke of 20 minutes, Cleiton Silva got on the end of a direct free-kick from 25-yards-out and found the back of the net with a sublime finish. The curling effort gave no chance to Mohammad Nawaz and brought the score to one goal each. BFC’s Prince Ibarra then had to leave the field after complaining of a muscle injury and was replaced by Edmund Lalrindika.

With two minutes left to the end of the first half, Lalrindika was brought down inside the box and the penalty was awarded to BFC. Sunil Chhetri stepped up but his attempt was brilliantly saved by Nawaz. The first half ended with nothing to separate both teams.

Des Buckingham chose to replace Vikram Pratap Singh with Raynier Fernandes at the break, and Ahmed Jahouh quickly went into the book with a yellow for a foul on Jayesh Rane after the restart. At the 54th minute mark, the towering Fall got on the end of a free-kick from Jahouh and headed the ball in the net, giving Gurpreet Singh Sandhu no chance of saving it.

Just after the hour mark, Cassio was taken off and replaced by Ygor Catatau. Seven minutes later, Raynier Fernandes’s low shot was saved brilliantly by Sandhu who was making his 100th appearance for the Blues. Then, Amey Ranawade took a yellow for a tactical foul on Rane. Chhetri also received a yellow card for a late challenge on Ranawade later in the second half.

Pezzaiuoli chose to replace Rane with Siva Narayanan in the 77th minute to inject more pace into the team. At the stroke of the 84th minute, MCFC put the win beyond doubt as Igor Angulo’s header hit the post but the rebound was expertly finished by Ygor Catatau to increase the lead to two goals.

Angulo was taken off along with Bipin, and the pair was replaced by Brad Inman and Gurkirat Singh. BFC also made two changes following suit by bringing Bidyashagar Khangembam and Danish Farooq for Chhetri and Suresh. Five minutes were added after the 90th-minute mark and the Islanders remained solid in defence to secure all three points.

Bengaluru FC will next play Hyderabad FC on Wednesday while Mumbai City FC is up against Jamshedpur FC on Thursday.