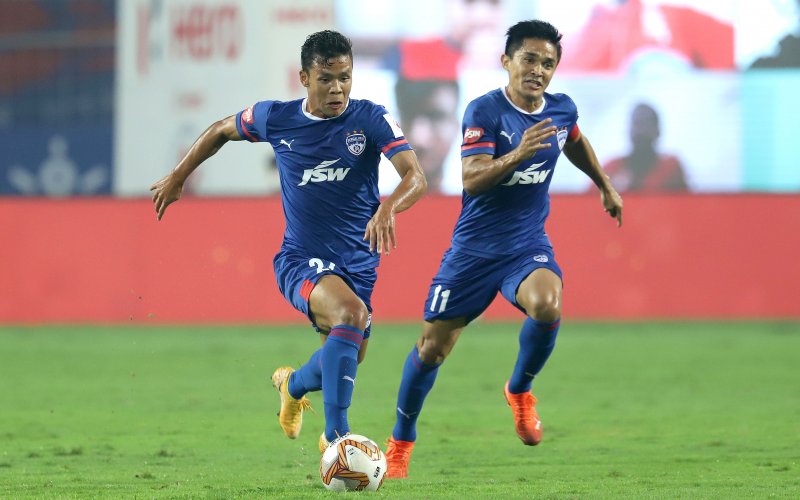 NEW DELHI: Bengaluru FC and former Indian Arrows midfielder Suresh Singh Wangjam has been one of the standout performers in the last two editions of Hero Indian Super League, impressing with his energetic and dynamic performances on midfield. In a chat with AIFF TV on Tuesday (February 16, 2021), the 20-year-old spoke about the influence of his seniors on him, including Blue Tigers and BFC skipper Sunil Chhetri, saying that he counts himself ‘lucky’ to observe him from up close.

“People call Chhetri-bhai ‘Captain, Leader, Legend’. I think it’s true – the way he speaks and trains – I am so lucky to be with Chhetri bhai and share a dressing room with him. He is a great example to follow and when you see him give his 100 per cent on the field, it pushes you as well. We can’t just stand and watch,” Suresh smiled.

“I can see the efforts he puts in and the sacrifices he makes. He is number one in India and has money and fame, but he works so hard and doesn’t think about all that. The way he handles the team is so good and in every session, we are motivated to give our best. I observe the way he plans his exercises in the gym and I try to inculcate that in my routine, and I can feel the positive effects when I play on the ground too,” he continued.

Suresh recollected his first start for his club in the Hero ISL last season and revealed how Chhetri’s team talk instilled confidence in him.

“I still remember the first game I started, against Odisha last season. Chhetri-bhai said to everybody in the dressing room that when I play, nobody will shout at me – even if I make a hundred mistakes. He asked everyone to encourage me and it gave me a lot of confidence,” he recalled.

Suresh, who was a key figure in the Indian side that took part in the historic FIFA U-17 World Cup 2017, has featured in 28 matches across the last two seasons after shining in the Hero I-League with the AIFF’s developmental side Indian Arrows, for whom he appeared 29 times in the league before moving to Bengaluru. According to the midfielder, another key influence on him has been Blue Tigers custodian Gurpreet Singh Sandhu, especially during their club’s pre-season, where the two were roommates. Suresh termed it as an ‘important’ experience in his life and shared why Gurpreet affectionately refers to him as his ‘son’.

“Gurpreet-bhai really takes care of me. In the pre-season, we were roommates for a month, and it was a very important period in my life. I got a chance to know what he does off the pitch and learn many things from him – about his diet, how he stays in the room, etc. I asked him a lot of questions and the nice guy that he is, he gave me a lot of good advice regarding my habits and lifestyle.”

“For example, he played a documentary on Michael Jordan for us to watch. First, I was bored as I had never watched such things but I realised that it was beneficial for me as I learned about Michael Jordan and his mentality. It’s good that I got something to learn and since then, I have started watching the stuff he would tell me,” Suresh shared.

“When I have a bad day, he calls me and tells me where to improve. He teaches me not only about football but also about my lifestyle, what to do in my future, etc. I remember that in just my second start last season, I gave away a penalty. I was worried about whether I would get a chance to play again but he came to me and hugged me, said it’s okay and called me ‘son’. Even better was that he saved the penalty,” the youngster laughed.

A box-to-box midfielder with endless stamina, excellent passing and tackling, Suresh termed Blue Tigers midfielder Eugeneson Lyngdoh as his favourite player and talked about how he is always ready to help and guide him.

He stated, “Eugene-bhai is my favourite player. I have been with him for one year and he is a very nice guy and taught me many things like my body position, always being open to receive the ball, and so on. I admire his long balls and set-piece abilities and I would often ask him to teach me and how I can improve. He would always help me and whatever you ask, he is always there, even now.”