Mumbai-based Kenkre FC are slated to conduct trials for their Women’s Football Team on the 25th of February at Goan’s Sports Ground in Churchgate.

Kenkre FC have long been regarded as one of the best sporting teams from Mumbai. Having achieved multiple accolades with their men’s team, the outfit has lately been reckoned as a powerhouse for budding talents in Women’s football.

It is during the last edition of the Indian Women’s League when Kenkre were eliminated in the Semi-Finals by eventual winners Gokulam Kerala after putting up commendable displays throughout the competition. The management has also provided opportunities to athletes coming from various states who have not only proven their mettle in the domestic competitions but have also represented the National Team.

Team FootballCounter went up and close with Mr Joshua Kenkre (Director of Kenkre FC) and spoke about the upcoming season, challenges imposed by pandemic, and the opportunities in women’s football.

1) What are the mandatory criteria put in place for the trials?

Due to the pandemic, we restricted the trials only for girls from Mumbai and Thane. It would have been good to have players from all parts of India but considering the COVID situation, we don’t know how things will work out. Hence, participants from Maharashtra is what we are focusing on.

2) If the situation gets eased sometime soon, would you like to have outstation aspirants undergo the trials in the later stages?

We don’t mind. As of now, we’re building the teams for the initial qualifier round so we are restricting it to girls from Maharashtra. When we play the final State Qualifiers round and there is no lockdown, we are happy to welcome outstation players. Last year we had footballers from different states but this year because of the pandemic we can’t have them. Maharashtra is a tricky area, so we need to be alert and restrict problems that are uncalled for.

3) What are the tournaments that are scheduled for the Women’s team this calendar year?

This season the only tournament scheduled is Maharashtra Qualifiers. We might also have the MDFA League and IWL qualifiers. I’m specifically looking forward to the IWL final round as it is going to be something new. The format might change, teams will have to undergo bio-bubble norms and the league is also expected to have more teams, so I’m pretty excited for this year.

4) What is your take on women’s football slowly being revived?

Honestly, we didn’t expect the Qualifiers to take place considering the current happenings. With the situation in Mumbai improving gradually, the association said they are keen to conduct the Qualifiers, which in my opinion is going to be a major boost for female athletes. The U-17 Women’s World Cup has been rescheduled for the next year and we have the AFC Championship that is coming up, so overall if things fall in place it would be exciting times ahead for Women’s football.

5) Any message for the participants you would want to share?

A couple of important things to keep in mind for the participants would be to have good physical condition and sound health. Kenkre FC could be a considerable platform for people who seriously have aspirations to take up football as a career. We had one girl named Soumya Guguloth, she was from Telangana and represented our team for the past 3 years. She is currently in Turkey with the National Team, so we’re striving to create a pathway for young girls who aspire to play at a larger platform and are serious about choosing football as a profession. 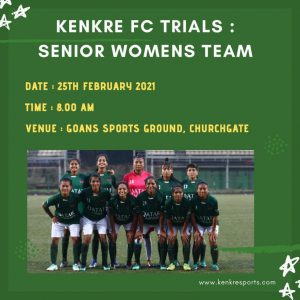