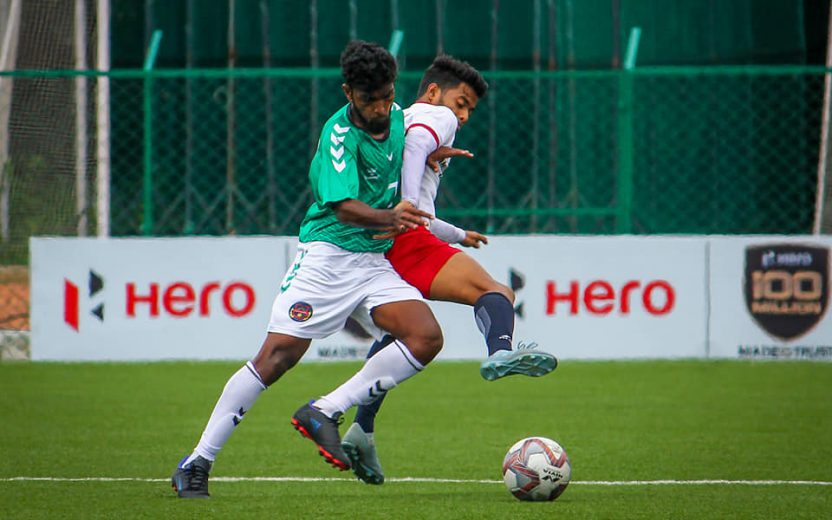 After two wins in two games, Mumbai’s Kenkre FC was held to a goalless draw by Corbett FC in their third game of the Hero I league Qualifiers 2021 campaign

A cagey game where both sides failed to take their chances ended in a goalless draw with Kenkre FC riding high on two wins settling for a point against a resolute Corbett defense who have ended their campaign without a win.

After a cagey start to the game, Corbett showed some initial plan of attack and came to breaking the deadlock in the 11th minute when Corbett striker John Chidi took advantage of the miss pass in Kenkre’s defense to steal the ball and drive into the box. However, the attacker failed to convert the chance as the ball clipped the outside of the left post.

At the other end, Kenkre FC manufactured an attempt of their own when Pravito, after some good work on the Corbett left flank, played the ball for an onrushing Aravind whose shot from the center of the box went inches over the bar. Soon Kenkre managed to gain control of the game although chances where were far and few.

Kenkre continued to showcase some good movements and possession play, often putting Corbett FC’s defense under pressure however, Corbett FC goalkeeper Ahamed Asfar was always on hand to deny the high-flying Kenkre FC. In the 35th minute, he made a fine save to deny Fernandes another potential goal while a few minutes later, Azza shot on goal was parried over by the Keeper. Moments later Azza had another opportunity to repeat a goal similar to last game after some brilliant passing and movement however the winger’s shot hit the crossbar to deny them a 1-0 lead going into the break.

The story of the second half continued to be the same with Corbett initially showing some conviction going forward winning a couple of Corners but failed to trouble Kenkre’s defense. Himanshu Patil came the closest to breaking the deadlock but his diving header went inches over the bar.

At the other end, Kenkre continued to create some good movements in the midfield and wings but failed to muster the much-needed finishing in the final third. Yash Mhatre was brought in midway through the second half and the substitute made an immediate impact with a couple of chances going close. In the 68th minute, Yash’s strike from distance took a deflection from a Corbett defender but seemed to be headed towards the far post only to be denied by a full stretched diving Keeper.

As the game neared the end, both sides upped the ante looking for an elusive winner. Aravind and Yash had a couple of shots on goal only to be denied by the Corbett defense. With just five minutes of play left, the rain started pouring in to settle down the game as both teams ended the game at 0-0 to share the spoils.