Indian Women stars bank on ‘collective dream to do well’ 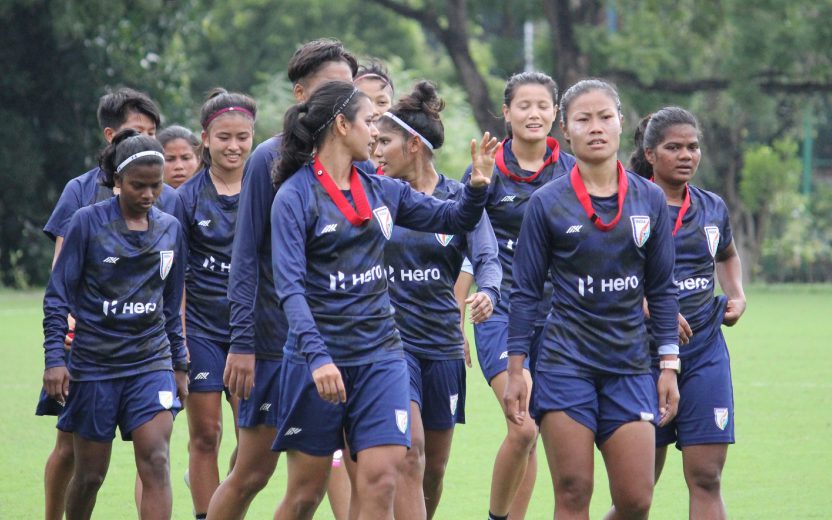 A day after the AFC Women’s Asian Cup India 2022 draw was held, the atmosphere in the Indian Women’s Team in Jamshedpur, Jharkhand, remains one of utter focus. The team has returned from a grueling exposure tour, where they faced six tough opponents in three different countries with completely different weather conditions.

The players had all gathered together to watch the draw live on Wednesday (October 28, 2021) at the team Hotel, eagerly waiting to see who they will be facing in the AFC Women’s Asian Cup, that India will host next year.

“We have a collective dream, and that is to do well in the Asian Cup. We only have a few months left now, and seeing the draw live was a huge motivating factor for us all,” said captain Ashalata Devi. “We had all gathered in the hall where we generally hold team meetings and have video sessions, but the only difference was that our future opponents were unfolding before our eyes. The atmosphere was absolutely buzzing inside the hall.”

“It was quite exciting for us when the draw was happening. The moments when they were picking out the teams for Group A, some of us just closed our eyes and held each other’s hands,” smiled midfielder Sanju Yadav.

“Every one of us had our own predictions,” laughed Ashalata. “I had also predicted Iran, because I have so much respect for them, and we did get them in our group right at the start,” she continued. “I have a lot of respect for them. Not only are they a very good side, but just the determination of all the women in their team to go out there and play football against all the odds is something that still gives me goosebumps.”

India have, earlier this month, played and beaten Chinese Taipei 1-0 in a friendly in Bahrain, and also beaten IR Iran in the Hero Gold Cup in Bhubaneswar in 2019 by the same margin, but Sanju is not one to dwell on past results.
“We’ve got equal respect for all teams. Yes, we have beaten Iran and Chinese Taipei, but that’s all in the past. Nobody will give an inch in the Asian Cup, and we have to fight for every little bit that we get,” Sanju averred.

Some of the Indian Women’s Team players have joined Gokulam Kerala FC in the club’s preparation for the pilot edition of the AFC Women’s Club Championship in Jordan next month. The draw itself was a completely different experience for them.

Winger Dangmei Grace explains, “We were all excited about the draw, and now is the time to focus on the job ahead.”