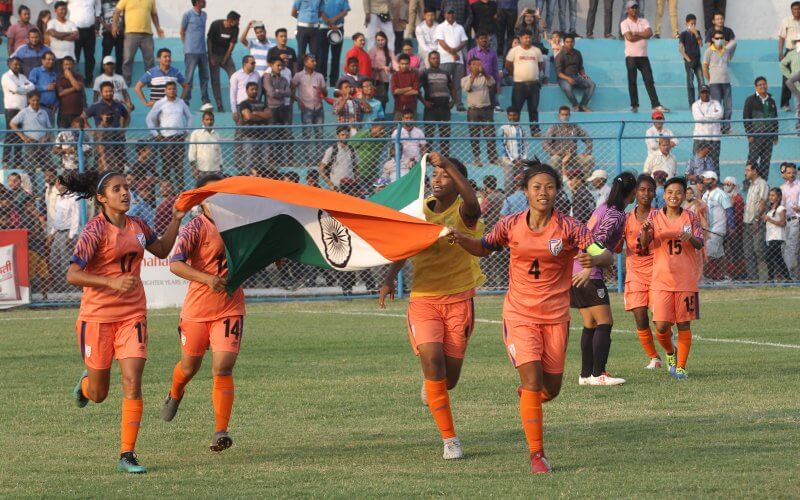 As Indian football continues to move forward together, a key aspect of the game’s growth in the country has been the continuous development of women’s football — right from the grassroots level through the Golden Baby Leagues to the senior national women’s team. With the nation observing the National Girl Child Day today (January 24, 2021), the country’s biggest women football stars speak about the importance of young girls gaining more opportunities to play and how playing sport can help bring the best out of every girl child.

Indian women’s national team captain Ashalata Devi shared her own experience of how she overcame opposition from her own family when she started playing football and how she doesn’t want any girl to face the same situations that she did.

She said, “When I started playing football, there were a lot of struggles that I faced because my mother did not support me playing the sport. Whenever I used to come back home after practice, I would get beaten up and she used to ask me why I wanted to play and say that this is not a game for women, you will get injured and then you will not get married. She was very scared.”

“I even stopped playing for a few months and then did not tell her when I started playing again. Once I got selected for the India U-17 team, she started supporting me. And now, when I tell her that I have played a lot and want to stop, she scolds me and tells me that that this is the time to prove to the world what I can do and motivates me to keep playing and give my best.”

Ashalata added, “From my experience, my parents did not support me and thus, I did not focus much on education back then. I don’t want any child to face this situation. Sports and studies can be balanced together and for that, support from parents is very important.”

Mercurial forward Bala Devi, who plays at club level for Rangers Women’s FC in Scotland and is the first Indian woman football to sign a professional contract with a top-division European club, talked about how she developed a passion for the game and how she hopes to inspire the next generation of women players through her journey.

“I used to play with boys in my locality as a child and there were many who did not like me playing and asked my parents to stop me. However, my father himself was a footballer and a striker too, and he never stopped me. He taught me a lot and told me to always keep football in my mind and even sleep with a ball in my hand. That’s how I developed the passion I have for the game.”

“Everyone has expectations from this journey of mine (in Scotland) and after scoring my first league goal for Rangers, people were talking not only in India but in Europe and across Asia that an Indian player has made history. It was really a proud moment and I want all the girls back home to be inspired,” Bala stated.

With India set to host the FIFA U-17 Women’s World Cup and the AFC Women’s Asian Cup next year, Bala feels that having events of such magnitude will encourage more and more young girls to take up football and help change the mindset of parents across the nation.

“The FIFA U-17 Women’s World Cup will make India shine out. I believe that it will also be a great opportunity for the U-17 girls to be noticed not just in India but internationally. At the start, we didn’t see many girls play football and now that girls will come from different countries to India and our girls will also get an opportunity to play such a tournament, it will definitely help change the mindset of parents,” Bala averred.

National team goalkeeper Aditi Chauhan mentioned how sports impacted her and helped her develop her personality, and the importance of the support she received from her parents.

“Football has totally transformed my personality and taught me to be strong, not be afraid and not hold back from expressing my opinions. In India, we are not very open about us making our own choices. Parents need to have more knowledge. Whenever I get the opportunity, I speak to parents and emphasize the advantages of a girl playing sports and increase their awareness.”

Parents play an important role in a girl’s life and whatever I have achieved, it is because of my parents’ support. There are a lot of opportunities out there and parents being a pillar of support is something that is so important. I want to encourage more and more girls to play sports. If they play football, it’s an icing on the cake. Football can bring the best out of a girl and build a competitive spirit.”

“I think a lot has improved but again, there is still a barrier and a lot of effort to be done. It is an inherent part of our culture and parents will still take time to understand and develop the mentality. There are a lot more girls playing and lots of competitions. However, we still have a long way to go,” Aditi opined.

Senior national team winger Dangmei Grace spoke about the potential impact of India hosting the mega-events and encouraged parents to keep supporting their daughters who want to take up the sport.

“I think the U-17 Women’s World Cup and Asian Cup will be an inspiration to the younger generation and to their parents also. Women’s football has changed a lot in recent years through the exposure we have got and the Hero IWL growing.”

“To the young girls who want to play football, I would like to say — keep on working, don’t give up easily, focus on your goal till you reach it and all the best! To their parents, I would like to say please give your support to your child. They are the future of our nation. Whatever they are planning, please keep supporting them.”