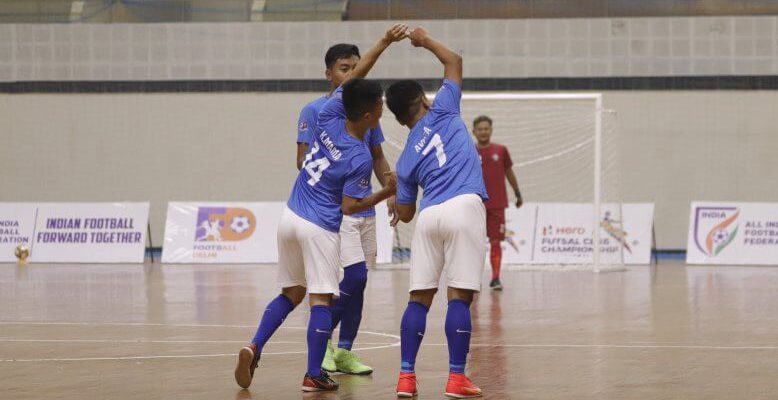 The game kicked off at lightning speed as Chanmari Zothan took the lead in the first minute via K. Mama. Baroda FC hit back instantly, as Sheel Parikh hit an equalizer in the second minute. Avida put Chanmari back in the lead in the ninth minute, and after that, it was one-way traffic.

Mawitea scored the fourth goal of the game before half-time for Chanmari Zothan, before a yellow card was flashed to Daniel Patel in the tenth minute of the game.

A blistering start in the second half ensured that Baroda FC had no chance to come back in the game. Three quick-fire goals were scored, one by Samuel and the other two by Mawitea, who completed his hat-trick in the process.

A scuffle followed near the 35-minute mark due to a foul, and as a result, Vikramaditya Chhabra from Baroda FC alongside Tetea and K. Mama from Chanmari Zothan were cautioned. Mawitea scored another goal in the dying moments of the game to make it 7 for Chanmari Zothan and in the process, taking his own goal tally to four in the match.

This result means Baroda FC have bowed out of the tournament. Chanmari Zothan have their next match of the tournament against Mohammedan Sporting Club, and they will need to secure all three points to have any chance of qualifying for the semi-final stages.

In a tight game against Kuppuraj FC, Sporting Clube de Goa secured a 3-2 victory by the narrowest of margins and bagged their first points in the Hero Futsal Club Championship 2021-22.

With both teams having suffered a defeat in their opening games, it was imperative that they secured maximum points in this match. This approach resulted in a cagey affair as both sides feared conceding first. The first half went goalless, with neither team able to convert any of the half-chances that they were creating.

In the second half, a swift goal for Kuppuraj FC by Rajaganapathy opened the floodgates. It broke the shell for Sporting Clube de Goa and they went on ultra-attacking mode. Two goals in two minutes followed as a result, with Lloyd Cardozo and Rohit Shankar Totad scoring in the 22nd and 23rd minute respectively.

Austin Jijo was given a yellow card in the 30th minute for a bad challenge. Kuppuraj FC tried their best and came close to scoring many times, which would have been the equalizer for them. Their hopes of securing even a point from this match were dashed by Lloyd Cardozo as he scored his second goal of the game in the 38th minute and gave Sporting Clube de Goa the buffer that they needed.

That buffer came in handy as Austin Jijo pulled one back in in the penultimate minute of the game. However, it was too little too late for the side from Pondicherry, who after having lost both their games so far have crashed out of the tournament.

Sporting Clube de Goa will come up against Speedforce FC in their next match and will be hoping that they can defeat them in the final match of the group stages.