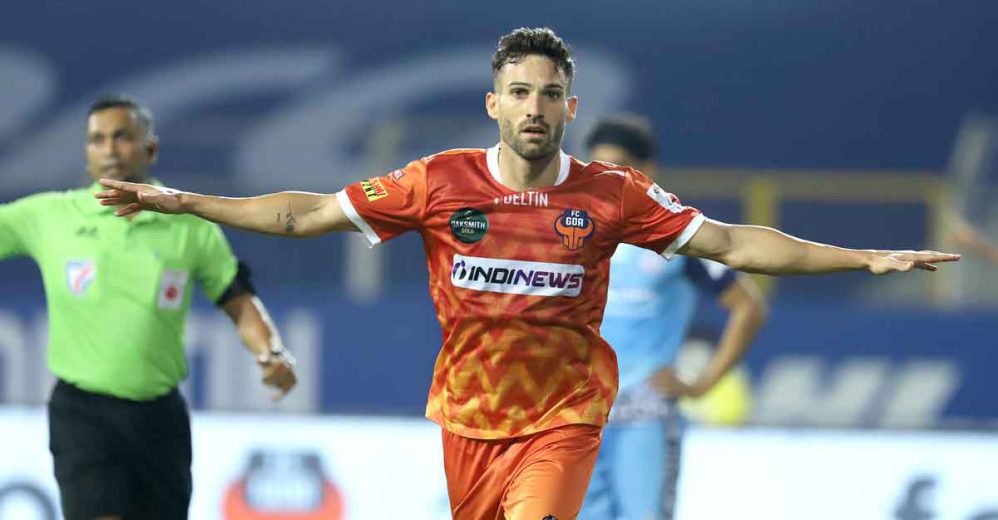 FC Goa kept pace with their rivals for a top-four spot with a clinical 3-1 victory over Odisha FC at the Fatorda Stadium in the Hero Indian Super League, here on Wednesday.

Goals from Alberto Noguera (18′) and Jorge Ortiz (26′) gave Goa an early lead to the Gaurs before Diego Mauricio (30′) pulled one back for Odisha. Ivan Gonzalez (75′) then put the result beyond doubt. The victory pushed Goa up to fourth with 27 points, same as Hyderabad FC in third and one point ahead of NorthEast United in fifth. The result also knocks out SC East Bengal from a mathematical chance at the playoffs.

Goa’s first goal was an exemplary display of team effort. A clever through ball from midfield set Gonzalez free down the left and his curling cross was headed in past Odisha keeper Arshdeep Singh by the onrushing Noguera.

Daniel Lalhlimpuia wasted a chance to bring Odisha back on an even keel, and they soon paid for that missed opportunity. Eight minutes after they had taken the lead, Goa went two up through a blistering counter-attack. The move started off an Odisha corner that Goa keeper Dheeraj Singh punched out of the box. The ball found its way to Saviour Gama, who found the run of Ortiz with a pinpoint pass. Ortiz was in behind the Odisha defence and beat the onrushing Arshdeep with a wonderful chip.

At that stage, it looked like Goa was going to run away with the match, but Odisha changed the complexion of the game yet again by grabbing a goal back, just minutes after they had conceded. A cross from Rakesh Pradhan on the left eluded Dheeraj and was headed in by Mauricio at the far post.

There was a chance towards the end of the half when Goa was awarded a freekick at the edge of the box, which came to nothing.

The second half saw end-to-end action with both teams going in search of a goal. While Goa had the better chances, Odisha still had opportunities to find an equaliser. The best of these chances fell to Mauricio, who received the ball inches away from the near post. However, he went for an audacious back-heel finish and failed to connect properly.

They soon paid for the wasted chances when Goa found a third. The goal was once again down to some poor defending by Odisha. They failed to deal properly with a corner, after Arshdeep had saved Gonzalez’s header, and allowed the Spaniard to poke the loose ball home.