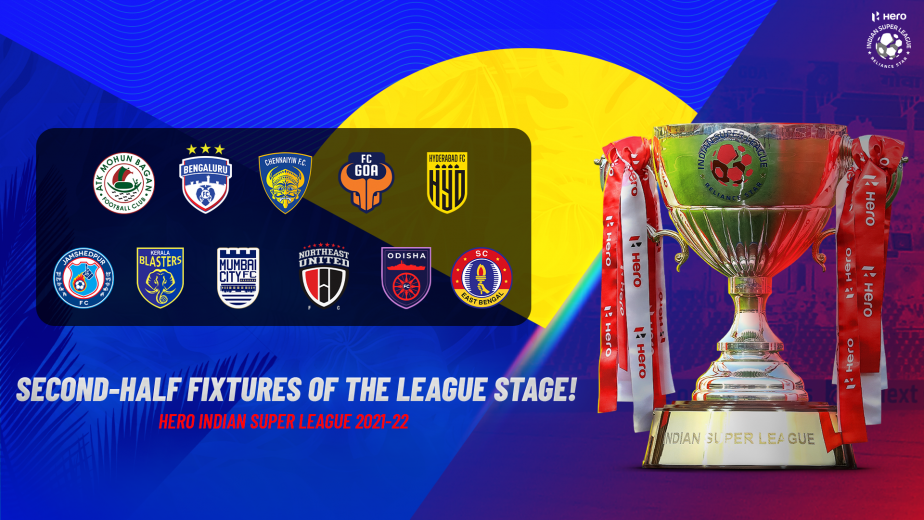 Football Sports Development Limited (FSDL) today announced the schedule for the second half of the 2021-22 Hero Indian Super League (ISL) season. The final 11 rounds will begin January 10, 2022 and will be played over a 55 day period as the teams fight it out for the end of season silverware.

This season’s Indian Super League has so far captivated the fans with high scoring games and high drama with many teams still being in contention to not only win the league but secure a   place in the top 4 to go on to reach the final.

Defending Champion Mumbai City FC is set to enter Christmas as league leaders, however, they are being pressured closely by Jamshedpur FC and Hyderabad FC – two teams desperate for their first semi-finals appearance along with two-time winners Chennaiyin FC.

With only 8 points separating the bottom-placed team from the top four, clubs will have ample opportunities to change the outcome of their season. Come January, the transfer market opens should they wish to add more firepower in their ranks to mount a challenge for both the League Shield and the ISL trophy.

The stage for Indian football’s oldest and grandest rivalry – the return leg of the Kolkata derby between ATK Mohun Bagan and SC East Bengal is set for Saturday, January 29 at the PJN Stadium in Fatorda. On the final night of the League phase, FC Goa welcomes Kerala Blasters FC at the Athletic Stadium in Bambolim on Saturday, March 5.

All 55 league games in the second half of the season are 7:30 PM kick-offs.