First International Friendly between India and Nepal ends in draw 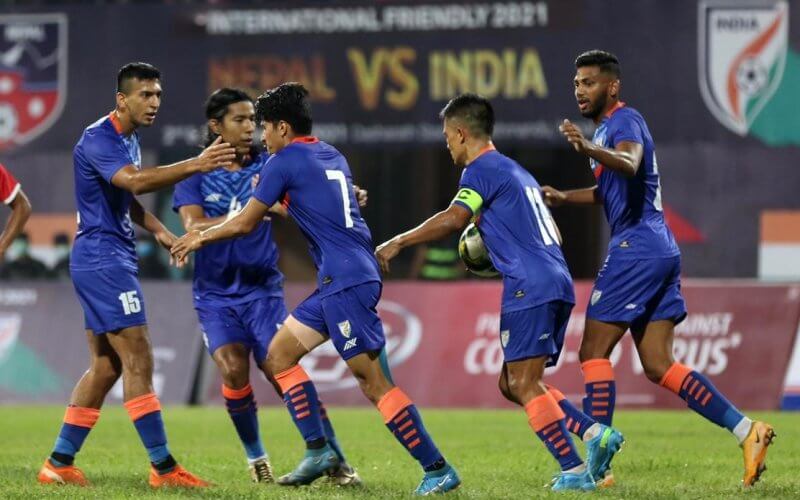 India and Nepal played out a 1-1 draw in an International Friendly held at the Dasharath Stadium in Kathmandu on Thursday (September 2, 2021). Midfielder Anirudh Thapa scored for the Blue Tigers in the 60th minute, with Anjan Bista having given the home team the lead in the 36th minute.

The first half kicked off with India straight away on the front foot, earning a corner with their first attack. Brandon’s delivery found Chinglensana Singh inside the box but he was denied a shooting chance with a last-ditch challenge. From the second corner, the ball found Chinglensana’s head again but his attempted shot went out for a goal kick.

Liston Colaco was a constant source of threat for India down the left flank, troubling the Nepal defence with his pace and dribbling. In the eighth minute, he beat his marker and produced a dangerous cross that did not find an Indian touch in the penalty area.

With one-fourth of the game completed, Indian skipper Sunil Chhetri won the ball high up the pitch and played it to Liston, who found Manvir Singh with a pass and he won a corner for the Blue Tigers. Brandon curled the ball in but the referee awarded a free-kick to the hosts as the referee blew for a foul on Nepal custodian Kiran Limbu.

Gurpreet Singh Sandhu was called into action on a few occasions, as he collected the long passes and crosses attempted by the Nepal wingers. Both sides battled it out for the opening goal and in the 36th minute, the hosts took the lead through Anjan Bista, who pounced on a loose pass in the Indian defence and put the ball in the back of the net.

India went forward in search of the equalizer, with Liston charging down the left flank on a number of occasions and entering dangerous areas with the ball. The score at the break, however, remained 1-0 in favour of Nepal, with Gurpreet making a couple of clean saves towards the end from long-range efforts from the hosts.

The Blue Tigers made a host of changes at the break, with Anirudh Thapa and Sahal Abdul Samad coming into their midfield positions, and Seriton Fernandes and Rahim Ali being brought on as well – making their respective senior India debuts.

Thapa’s free-kick in the 50th minute caused havoc inside the Nepal penalty box as the ball fell to Sunil but he was denied by an onrushing Kiran. The Nepali keeper continued to press the ball outside his area and blocked a cross with his hand, earning him a yellow card.

Just three minutes later, Sunil almost found the back of the net with a trademark header. Manvir crossed from the right flank and the Indian skipper headed the ball at the far post but his effort was just wide of the target.

At the hour mark, the Blue Tigers got the leveller through substitute Thapa, who showed great awareness to poke the ball home from close range. Sunil’s fierce shot from 25 yards could only be palmed into the six-yard box by Kiran and an onrushing Thapa was on hand to react quickly to the rebound and score.

Rahim almost added a quick second goal with a curling effort from outside the penalty area, soon after, but his shot went just past the wrong side of the upright.

Lalengmawia replaced Suresh Wangjam in the 63rd minute and Bipin Singh was brought on for Sunil Chhetri in the 70th minute as India continued to push for the go-ahead goal.

With 10 minutes to play, Nepal’s Bishal Rai found space to shoot inside the penalty area but his shot was blocked promptly by Rahul Bheke, as Gurpreet collected easily.

Manvir was inches away from scoring in the 83rd minute after Thapa’s free-kick found Bheke inside the box, who headed the ball across the face of goal. Manvir received it and beat his marker, but his shot towards the far corner from a tight angle went narrowly wide.

The Blue Tigers piled on the pressure and Rahim had a great chance to score the winning goal with two minutes of regulation time left as he charged in on goal after receiving a through-pass. However, his effort across the keeper slid off-target and eventually, the match ended in a 1-1 draw.

The two sides will be in action once again on Sunday (September 5, 2021) in the second International Friendly, which will be played at the same venue and will kick off at 5.15 PM IST, and will be streamed live on the Indian Football Team Facebook page.

India vs Nepal- Preview, Head to Head and Where to Watch
Kolkata – the Mecca of Indian Football, will be home to the Durand Cup for the next five editions