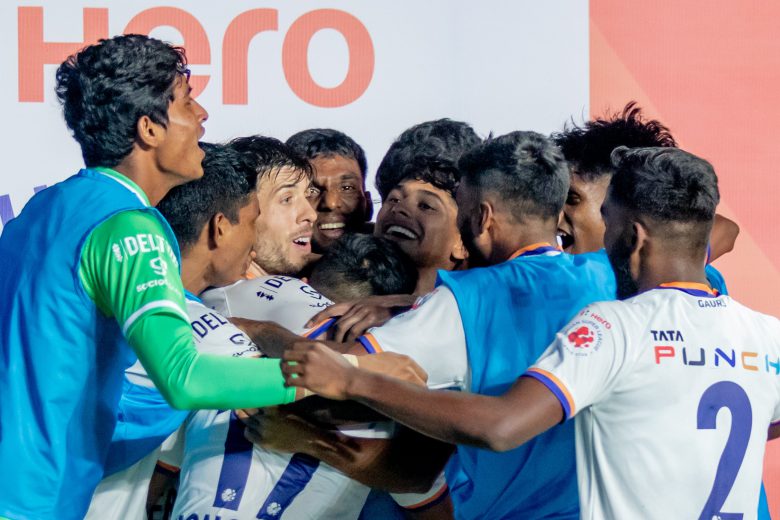 FC Goa finally recorded their long awaited first win of the season in the Hero Indian Super League with a 4-3 win over SC East Bengal tonight at the Tilak Maidan Stadium in Vasco, Goa. Alberto Noguera was the star of the show as the Spaniard struck a brace to help his side to their three points of the campaign.

The Gaurs took the lead three times just to see the Red and Gold side crawl back into the game on each occasion. However, a flurry in the final 15 odd minutes of the competition helped them get the better of the Kolkata side.

Three losses in as many games to start the season meant that Juan Ferrando rang in the changes, not only in terms of personnel but also formation. The Gaurs moved to three at the back with Mohamed Ali given his first start of the season.

FC Goa started off on a bright note, controlling possession and the tempo of the game from the offset. The early dominance soon bore fruit for Goa as Alberto Noguera propelled the Gaurs into the lead in stunning fashion.

Three minutes later, the Gaurs were at it again as Edu Bedia played in Ortiz on goal with a slide rule pass. Ortiz’s superb run, however, did not match the finish as his first time effort was woefully off target.

Goa would be left to rue the missed opportunity as East Bengal drew level in equally dramatic fashion in the 26th minute as Antonio Perosevic thrashed home the equaliser from 30 odd out with an effort that left Dheeraj Singh in the FC Goa net without a prayer and rooted to his spot.

East Bengal’s joys would last just six minutes though Juan Ferrando’s men took the lead from the penalty spot this time. Jorge Ortiz stepped up to the plate and made the goalkeeper go the wrong way for Goa’s second and his first of the season.

SC East Bengal drew level once again in the 37th minute. This time it was Amir Dervišević whose free kick from the right flank eluded everyone and deceived Dheeraj whose last gasp lunge was proved to be not enough.

Goa, though, showed real character to take the lead a third time before the break. Devendra Murgaokar made the most of his near post run from a corner that went unmarked. The forward got into a brilliant position but can count his lucky stars as he saw his glancing header crash off Antonio Perosevic and into the back of the net to make it 3-2 heading into the break.

Drama continues in the second half

The second half began with both sides eager to ensure their side scored the next goal and SC East Bengal beat the Gaurs to it.

In the 57th minute, SC East Bengal pulled one back to draw level with FC Goa once again. Peroševic was quick to intercept Glan Martins’ back pass before powering past the FC Goa defence and neatly slotting the ball to the left of the onrushing Dheeraj Singh.

East Bengal had the chance to go in front themselves in the 78th minute. A powerful attack down the right saw Peroševic and Chima combine to create two great chances back to back but were denied first by an acrobatic save by the onrushing Dheeraj and then by some poor finishing.

FC Goa were quick to punish SC East Bengal for their missed chance through Noguera in the 79th minute. A cross from Ortiz found Noguera after a smart fake from Nongdamba Naorem to drag his marker away from the Spaniard. The 32-year-old made no mistake in smacking the ball past the East Bengal keeper and into the net for the winner.

Goa next take on Bengaluru FC at GMC Athletic Stadium on Saturday, 11 December.