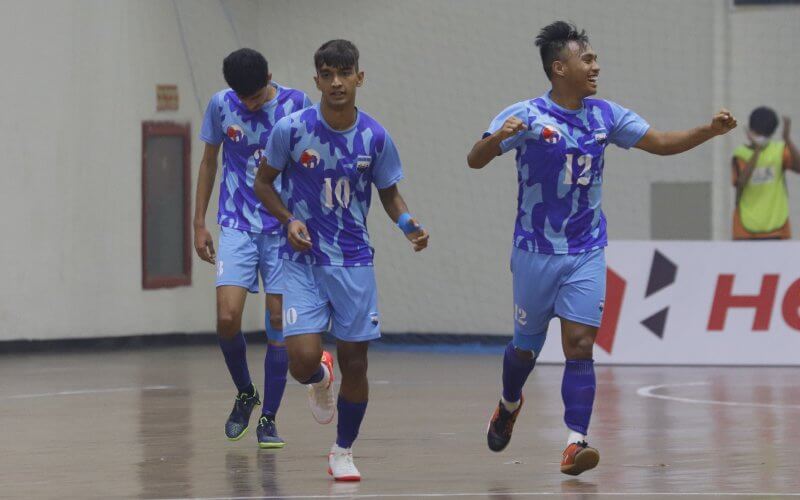 It was an absolute goal-fest at the Indira Gandhi Indoor Stadium in the second semi-final of the Hero Futsal Club Championship, with Delhi FC securing their spot at the grand finale of the tournament as they defeated Mangala Club by a 12-7 margin.

As soon as the referee blew his whistle, Delhi FC were on the attack and it did not take long for them to open the scoring. Skipper Nikhil Mali put it in the back of the net in the first minute of the game. His shot took a deflection and went into the Mangala goal.

If fortune favoured the brave for the first goal, there was a sheer class in the second. Nikhil Mali dropped his shoulder to turn near the penalty spot, leaving his marker flat-footed, and drilled his shot into the bottom corner to make it 2-0 for Delhi FC.

Mangala Club tried to hit back right away, but were denied by an excellent Scott Moraes save. The hero could have turned into a villain straight after, as Moraes was dispossessed at the halfway line but Babul Kumar Rout missed an open goal, only managing to hit the upright with his attempt.

In the 9th minute, with the scoreline still at 2-0, Nikhil Mali put in a low cross from the left for Fahad Temuri to tap it into the back of the net, making it 3-0.

The goals continued to flow for Delhi FC, with Mali completing his hat-trick in the 13th minute. This was also his fourth hat-trick in as many games in the Hero Futsal Club Championship, highlighting the kind of performances he has shown in this tournament.

Peka scored two goals in as many minutes for the capital team, with Tejas Bhandari making it 7-0 before the break. In the dying embers of the first half, Babul Kumar Rout scored a wonderful backheel goal for Mangala to make the score-line read 7-1 in Delhi’s favour at half-time.

Right at the start of the second half, Dinabandhu Das went for another strike but the ball struck both posts before bouncing out. The pace of the game slowed down compared to the first half, but it again took off in the last 10 minutes of the game.

An own goal from Isac made it 8-3 before goals from Remruata and Temuri took Delhi FC’s goal tally into the double digits. Goyary scored another one in the 39th minute, before Dinabandhu Das scored his 15th, 16thand 17th goals of the tournament to make it 11-7 in favour of Delhi. Bhagirat Singh scored off a deflection in the last minute of the game to make it 12-7, which wrapped up the scoring in this fixture.

Delhi FC have a stern test coming up for them in the final of the Hero Futsal Club Championship, with a defensively astute team in the form of Mohammedan SC waiting for them.

The grand finale will take place on Saturday, November 13, at 8.30 PM (IST) at the Indira Gandhi Arena. It will be broadcast Live on Eurosport and Eurosport HD, and will also be streamed Live on the Indian Football Youtube channel, and the Indian Football Team and I-League Facebook pages.