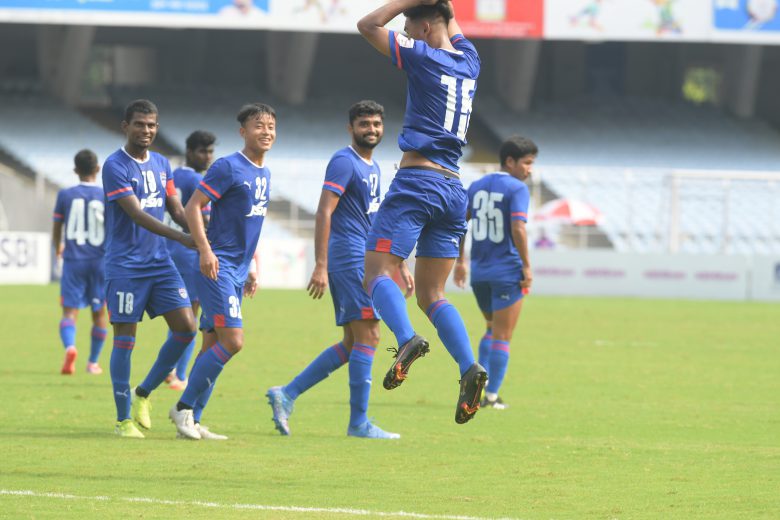 Bengaluru  FC advance to the semi-finals!

Kolkata, September 25, 2021: Bengaluru FC (BFC) came from behind yet again to register a 3-2 win against Army Green in the final quarter-final encounter of the 130th Durand Cup, at the Vivekananda Yuba Bharati Krirangan (VYBK) on Saturday afternoon. They now come up against FC Goa in the second semi-final scheduled for Wednesday, September 29, 2021, at the same venue.

Wungngayam Muirang, Leon Augustine and Namgyal Bhutia got on the score-sheet for BFC while Lallawmkima and Vibin T V scored for the Greens, both incidentally via penalties.

Army Green created pressure early on and were rewarded for that as well as well as Lallawmkima scored from the spot in the 9th minute to the give the regimental side a lead.

However, the Naushad Moosa coached BFC did not take long to bounce back as Muirang scored the equalizer in the 20th minute, courtesy a magical free kick that curled into the back of the net, giving Green’s keeper Sarath no chance whatsoever.

BFC played an attacking game post that and created quite a few chances but failed to convert any of them in the first half.

However, they did not take long to go ahead in the second as Leon Augustine scored the second for his team just minutes into the second half.

Namgyal Bhutia then scored the third just before the three-quarter hour mark to give the Blues a comfortable two goal cushion.

Dip Majumdar and Deepak Singh did create their chances and put pressure on the Bengaluru goal but the Blues defence did well to keep the lead intact.

In the last few minutes, Army Green pulled one back, through another spot-kick but it was all over by then.

Wungngayam Muirang was adjudged the Man of the Match for his excellent overall returns in the game including the goal scored.