KALYANI: Churchill Brothers will look to regain their mojo and move back to the top of the Hero I-League when they take on ninth-placed Chennai City FC, at the Kalyani Municipal Stadium in Kalyani, West Bengal tomorrow (February 18th, 2021). The kick-off is slated for 7 PM IST and the match will be broadcasted live on the 1Sports channel, whilst streamed live on their Facebook page.

Chennai City lost to title contenders RoundGlass Punjab 2-0 and now sit in 9th place with 9 points from 7 games. With the competition pretty tight in the middle of the table, Satyasagara’s side still has a chance of moving into the top half of the table, before the next stage of the Hero I-League. However, they will need to probably bring out their best performance of the season if they want three points from Churchill Brothers.

Speaking at the official pre-match press conference, head coach Satyasagara of Chennai City FC said, “I believe we played well in the last game. I was happy with (Demir) Avdic’s performance, and he is getting used to the pace of the Hero I-League. Vineeth was also outstanding. We showed many positives but did not have much luck, and made a couple of schoolboy errors which cost us the game.”

“We want to finish in the top six. Looking at the points table, we are not far away from being there, and most of the teams are in a similar situation. I am looking at the positives, and praying that our team will do well in the next couple of games.”

“Churchill Brothers are among the title contenders for this season. It is going to be a difficult game for us playing against such a quality side that wants to keep building on their momentum. They are tough opposition, but we have had good rest and are ready to face them,” the Singaporean coach added.

Goalkeeper Kabir Toufik said, “We are feeling motivated. We are giving 200 per cent in training, during the games and will keep up the same commitment. We haven’t had luck on our side during a few matches, but I still believe that the team is continuously working hard and following the coach’s instructions on the field.” 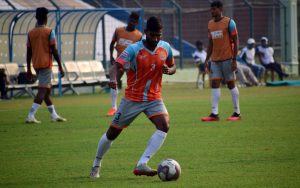 Churchill Brothers drew against Real Kashmir in their last game, extending their winless streak to three games. The Red Machines have seen a slight dip in performances, leading them to drop to the third spot with 13 points from 7 games. Fernando Varela’s side has had some time to rest, and with top scorer Clayvin Zuniga back they will be looking forward to getting back to winning ways against Chennai.

Speaking at the official pre-match press conference, head coach Fernando Varela said, “The players are positive even after the draw against Real Kashmir. We had many players out injured and had to do with makeshifts in defence and attack. Despite these absences, the players displayed great character, trying to attack and win the game.”

“Chennai City have good recent history. They have won the I-League once already. They have retained the core from last season, and have made some quality additions- both Indian and foreign. They are good in attack, with players like Demir Avdic, who make smart movements off and on the ball.” he added.

Forward Clayvin Zuniga, who returned from injury in the last game as a substitute said, “It is good to be back. I feel good both mentally and physically, and want to help my team to return to winning ways.”