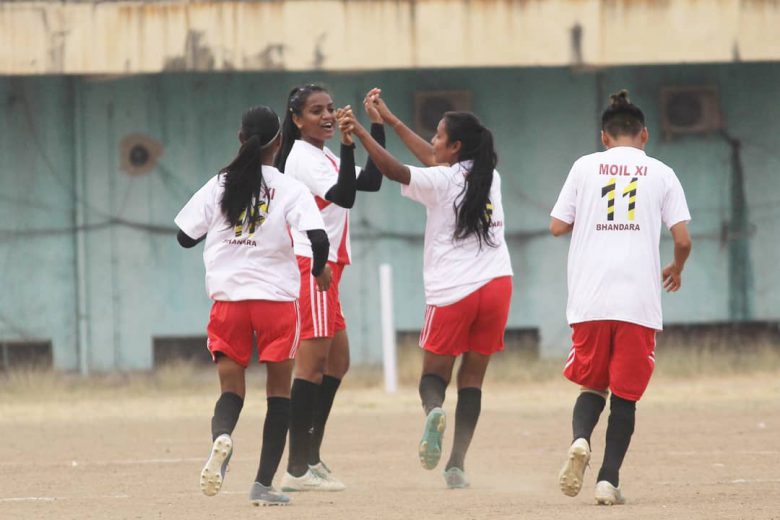 A fiesty day of football on Matchday 2 of the WIFA Inter-District Women’s Open Championship in Jalgaon hosted all the knockout matches.

The first clash of the day was played between Gondia and Wardha, in which Gondia clearly dominated the game with their balanced gameplay of attack and defense. Gondia’s star forward Tripti Deep scored a hattrick for her team which ended up winning her side by a lead of 4 goals.

Game 2 was the most interesting encounter of the day as it ended up as a draw and went into penalties! The match was between Jalgaon and Amravati where Jalgaon kept on maintaining their lethal attacks but Amravati’s entire team was on defense. Jalgaon’s goalkeeper Nazia Fatema saved the day for her team with her outstanding saves, at the end, Jalgaon won 3-1 in penalties.

Pune district outclassed Yavatmal in the third game, where Pune started scoring from the first minute itself! With more than 70% possession, Pune created a lot of chances in the first half and netted the ball 6 times. Sonali Chemte the super striker scored a total of 6 goals in the match. Fast build-ups through accurate passes were the key to Pune’s success.

In the next encounter, Mumbai thrashed Chandrapur by netting 11 goals in total. Captain Deepika Masurkar boosted the team’s confidence by scoring an early goal, Mumbai were up by seven goals at the end of the first half. Mumbai’s Mayuri Morey and Meenakshi Bhagat both scored hat tricks for their teams respectively.

In the contest between Palghar and Buldhana, everyone was surprised by Buldhana’s gameplay as they secured a comfortable win over the mighty Palghar who looked in good shape on day 1. Buldhana started putting pressure from the first minute, created plenty of chances but was not able to score. In the second half, Palghar tried player marking strategy to stop Buldhana’s attack, but Palghar failed horribly and lost. Dipshika H, Nikita J and Purva B scored 1 goal each.

Thane played out an exciting game against Osmanabad, in which Paromita C shined as she scored a hat trick for her side. Osmanabad who won their first game against Nashik was not able to stop Thane’s deadly attacks. Poonam K added to the list by scoring a wonderful goal, it ended with Thane leading by 4 goals.

The second last contest played Bhandara and Satara. Striker Priyanka Gurung was on fire, as she shocked everyone with her skills, dribbling and goals. She scored 3 goals in the first half, to end Satara’s dream to qualify further. But unfortunately, Priyanka got injured in the ending minutes of the game and was called off. Satara came back strong in the second half but wasn’t lucky enough.

The last match was the highest-scoring game in the tournament so far, where Kolhapur netted the ball 14 times against Akola. Kolhapur’s intentions were clear from the first minute, they never stopped attacking, as they didn’t allow Akola to enter their half even once! Jyoti D, Adhika B and Prithvi G scored hat tricks for Kolhapur in this 14 goal lead.