The WIFA Inter-District Football Championship is set to commence from tomorrow, the 2nd of February 2020. It is scheduled to take place until the 9th of February. After winning the title the previous year in Nashik, Kolhapur is set to host the tournament this year.

As many as 34 Districts including the likes of Nagpur, Pune, Mumbai, Nashik and others will take part in this year’s tournament. Each team will have 5 registered U-21 players in their squads, with a mandatory 3 players on the field during matches.

The WIFA Inter-District is a knockout tournament in which Kolhapur and Nagpur will directly take part from the Round of 16s since they were the finalists of the previous edition.

Here are the fixtures for your perusal: 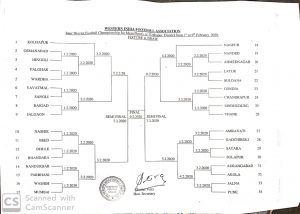