In the southern part of Maharashtra, football is a popular sport. Particularly in the Kolhapur city. There are 16 professional football clubs who take part in the regional league under the aegis of Kolhapur Sports Association. The KSA Division A use the historic Rajarshi Shahu Stadium to conduct the matches. The Football Mahasangram is an annual, summertime championship.

During I-League 2010-11 season, Rajarshi Shahu Stadium hosted numerous matches of Mumbai teams due to unavailability of Cooperage Ground in Mumbai. Mumbai FC, ONGC FC and Air India played all of their home games at this ground throughout the 2010-11 Season.

The stadium has a capacity to hold around 30,000 people. And in the past, the stadium has witnessed such humongous number of fans flocking in to support football. After the Rovers Cup, the fan culture in Mumbai has only seen decline. However, the city of Kolhapur boasts the active football lovers who make time out of their busy schedules to watch and support football.

The WIFA Inter District Men’s Open Championship is taking place at the Rajarshi Shahu Stadium this year. As expected, in Kolhapur’s opening encounter against Wardha, as many as 3,000 fans came to watch the match in a hot Wednesday afternoon. The fans went home with great joy, as Kolhapur thumped 8 goals past Wardha to qualify for the next round. 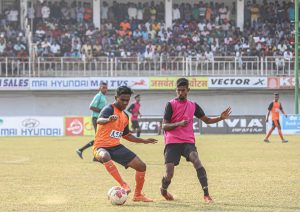 Similarly, there has been a steady rate of fans coming into the stadium to support the Inter District tournament. In tomorrow’s important clash in between Mumbai and hosts Kolhapur for the Semi Finals of the WIFA Inter District Open Men’s Championship game, the Kolhapuri fans will play a massive role and act as the 12th man for their district.