5-A side Football / RedBull Neymar Jr. 5 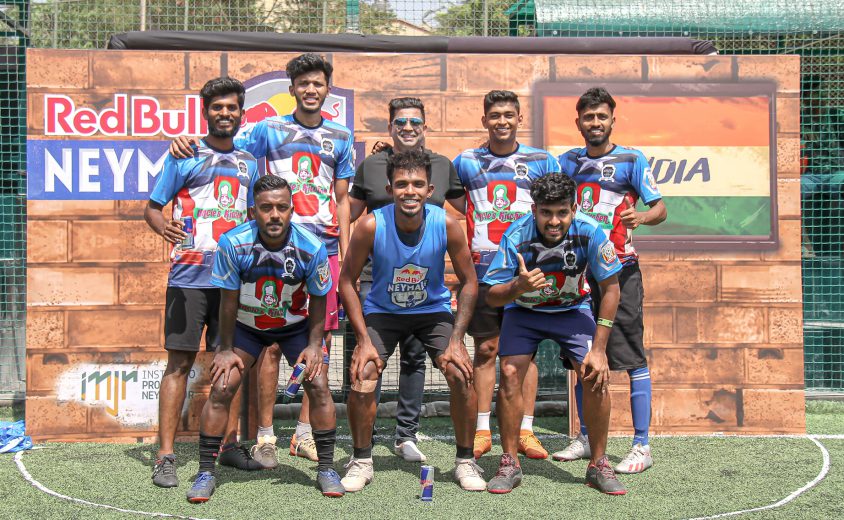 With around 97 teams participating in the two day event, UK united edged FC Cecilians in the final and will now represent the city at the national finals.

The city qualifier witnessed a total of 97 teams participating in the 2 day event wherein the winner would then go on to play national qualifiers. Winner of National qualifiers will then get to represent the country in World finals in Brazil.

Day 1 saw, all the teams playing in a knock out format after which 8 teams were left to play quarterfinals on Day 2. Highlight of the day 1 was the high-octane intense encounter between two former National champions Kalina Rangers and Joga Bonito facing off each other early in the tournament in Round 2. The two sides have met each other in the finals of the various tournament numerous times.

Although formerly both sides had pretty good relations, a rift before the game spiced up the match making it a must watch for all. Joga Bonito eventually ended up on the winning note.

On Day two, Joga Bonito, LOF, Cecilions Superstars, Cecilions A, UK United, SRFC, Cecilions B and Navanagar were the 8 teams in the quarterfinals. Joga Bonito, Cecilians B and UK united produced dominating performances on their way to last four while Cecilions A edged Superstars by 1-0 score to reach last four.

It was in the first semi-final that Former National Champions Joga Bonito’s run finally came to an end. After a goal less game, FC Ceclilans A struck in the Tie-breaker round courtesy of Karan Prajapati’s heroics to reach the finals. Meanwhile in other semi-final round, UK United produced a sensational performance to come from a goal down and register a 2-1 win with a last minute strike to end FC Cecilians ‘B’ Campaign.

In the final of the tournament another humdinger of game ensued which eventually ended in 0-0 at full time whistle. In the Tie-breaker, Uncle Kitchen United managed to edge FC Cecilians A to book their place for the National finals.

Last year, the signature football tournament saw more than 1,00,000 players taking part in 40 countries across 6 continents with the hope of making it all the way from the qualifiers to the World Final in July at the Instituto Projeto Neymar Jr in Praia Grande, Brazil.