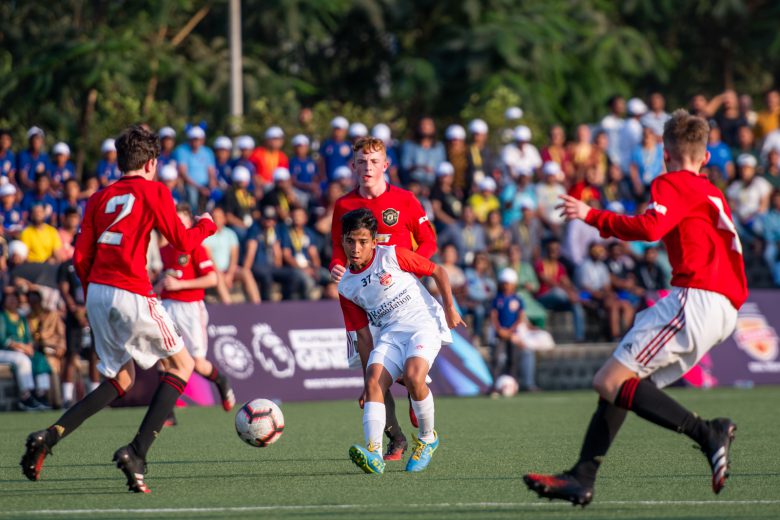 It was a day to reckon for Indian football as RF Young Champs overcome Manchester United Youth side in the final day of PL-ISL Next Gen Mumbai Cup here at the Reliance Corporate Park Football Ground in Navi Mumbai today.

Reliance Foundation and FSDL Chairperson Mrs Nita Ambani cheered on from the sidelines as Indian football’s superstars of tomorrow defeated Manchester United Under-14s 1-0 in a celebration of youth football and a coming together of two footballing cultures.

Both the teams began the game at a good tempo, and moved the ball around swiftly in midfield. The Young Champs looked to be more assertive and forced their counterparts from United to lose the possession at times.

Supratim Das initiated a few incisive moves through his passes and put the away team’s backline is a spot of bother. James Nolan, United’s right-back, was a sturdy figure in the defense and he made some important interceptions to win the ball back for his team.

The boys from RFYC increased the intensity as the game progressed and created multiple goal-scoring opportunities. Rashid CK, who had been instrumental from the beginning, scored the first goal of the match as he took an accurate shot from the corner of the box.

United immediately responded as Tomas Jones deftly put the ball in the back of the net. However, the forward was subsequently found to be in an offside position and hence that goal was ruled out.

The Reliance Foundation Young Champs nearly doubled their lead but Chingangbam Shivaldo Singh’s header from a free-kick missed hitting the goalpost by a very small margin. Harsh Palande came on the pitch as a substitute and made some incredible runs through the flanks that erupted cheers from the audience.

United tried their best to level the scores and the likes of Ruben Curley and Ethan Wheatley played a key role in trying to conceive a comeback for their team. However, the home team managed to hold on to their lead and in the process, completed a glorious win.

Chelsea’s youth team was declared the champions of the PL-ISL Next Generation Mumbai Cup 2020. The ‘Young Blues’ won all five of their matches and concluded their campaign with a 4-0 victory against Bengaluru FC this morning. Manchester United finished second in the points table whilst RFYC cemented third place with this victory.

Premier League and Hero ISL demonstrate commitment to development of Indian football with renewed Mutual Cooperation Agreement
Playing football at this level is a dream come true for me: Bala Devi