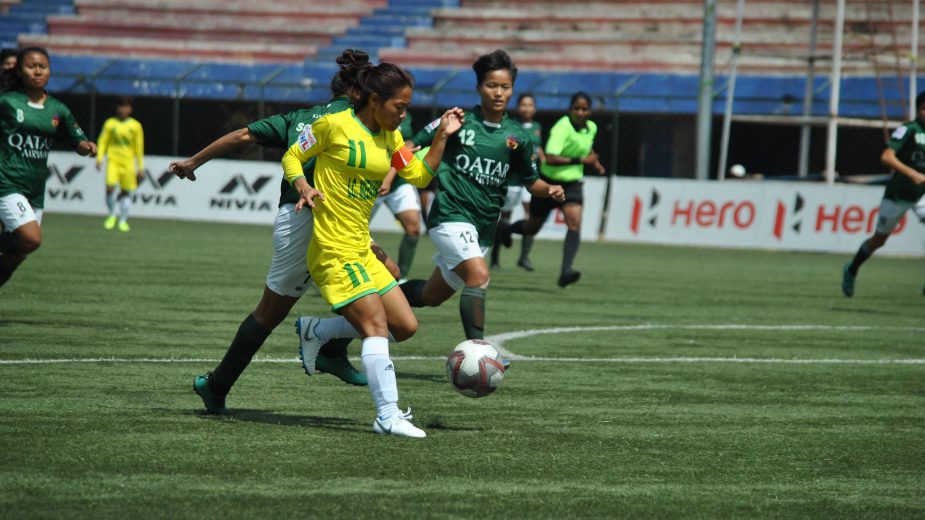 Ratanbala Devi scored a brace to fire KRYPHSA into a 2-0 lead before Jyoti pulled one back in stunning fashion for Kenkre. Roja Devi added Kryphsa’s third in the second half, which served as an insurance goal to see them through.

Coming into the semi-finals on the back of a perfect run in the group stage — winning all five of their matches while scoring 15 goals and conceding none, KRYPHSA were clear favourites. The team from Manipur weren’t weighed down by expectations as they got the ball rolling and broke the deadlock early in the 18th minute.

Coupled with some questionable defending in this instance from Kenkre, Ratanbala Devi made the most of her half-chance, pulling her trigger from the edge of the box as the centre-halves remained reluctant to close her down. Her effort gently nestled the bottom right corner to put Kryphsa ahead by a goal.

Ratanbala Devi added her second in the 38th minute after being played down the left. She kept her nerves and with deft finesse, outsmarted keeper Monika Devi again to allow her side some breathing space. Much against the run of play, Kenkre pulled one back going into the break, in the 43rd minute.

KRYPHSA keeper Linthoingambi Devi was yet to collect the ball from the back of the net in this tournament and it took a wonder strike by Jyoti from near the half-way line to catch her by surprise and break her resistance. The complexion of the game had changed after that goal, with KRYPHSA approaching the game with more caution and less swagger after the break.

The nerves were settled in the 63rd minute by Roja Devi, who chested down an out-swinging corner on the edge of the box and with a couple of Kenkre shirts closing her down, volleyed it to perfection to restore the two-goal cushion.

Kenkre defended for their lives to remain in contention until the dying minutes, but KRYPHSA reigned and emerged victorious and are now on course for their first-ever IWL final, where they will face the winner of the second semi-final between high-flying Gokulam Kerala FC and defending champions Sethu FC.

Ratanbala Devi was adjudged to be the Hero of the Match for her match-winning brace.