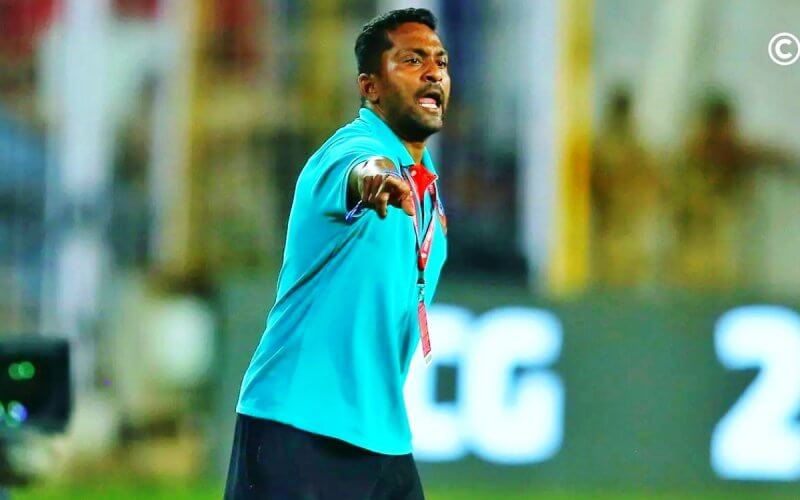 In most of the then National Team Head Coach Wim Koevermans’ analytical sessions, there used to be one hand regularly going up for most of Koevermans’ dissections during the team meetings. It was from then that Clifford Miranda’s reading of the game caught everyone’s eye.

Five years later in 2019, Miranda is today India’s latest pro-licenced coach — having completed his Pro Diploma from Tashkent, Uzbekistan. Ask him about those team meetings, and Miranda smiles – all in an effort to evade.

“It was only when I met Arthur Papas in 2014 that I felt the urge to take up coaching,” Miranda informs. “The manner in which he paid attention to every minute detail impressed me. I gauged that coaching was perhaps more challenging than being a player. It won’t be wrong to say that Arthur drew me to coaching,” he narrates. “And finally in 2017, when I was playing for Churchill Brothers during my last year in professional football, Derrick (Perreira) convinced me to join FC Goa.”

For the record, Miranda completed his C-Licence in 2014, the B Licence in 2016, and the A Licence in 2017 before completing the Pro. “I knew it was futile to wait. Hence, I took the plunge early.”

‘MENTALITY OF PLAYERS HAVE CHANGED’

“It’s your interest that drives you as a coach. And with that, your clarity,” Miranda turns philosophical. “Once you are a coach you need to decide your philosophy – as to what kind of football you want your team to play. You cannot be blank in your mind, and go there on the field,” he goes on.

“Coaching is not a normal job. Here you need to read into minds, manage different personalities. At the same time, you need to have in-depth knowledge of technique, tactics, understand the psychological aspects of not just the players but the entire squad – you need to man-manage. A coach needs to be modern,” he explains.

“The world is evolving every day and along with that, football too. The mentality of today’s player compared to some 20-years back is entirely different. Today’s players are more forthcoming, and are brave. So a coach needs to be prepared. If you stay stuck to old times, it can backfire,” Miranda maintains. “For example, 20 years back, or even 10 years back, there was no social media. It’s an entirely different world now.”

In his illustrious playing career, Miranda, who represented India in 44 International matches, made his international debut for India in 2005 against Pakistan in an International Friendly in Quetta, and scored 6 International goals. At the domestic level, he won the National Football League twice, and the I-League thrice besides a host of other tournaments.

‘PRESSURE CAN BREAK YOU, IT CAN MAKE YOU’

“Isn’t football all about handling pressure,” Miranda queries. “Pressure can break you, it can make you. Knowing how to handle it comes with the game. The more the pressure, the more resilient I become. It’s important to channelise the pressure into a stepping stone as pressure enables you to reach a higher level. it unearths a different side of you.”

“As a player, I hated losing, and the trend continues,” Miranda pauses.

“But as a coach, it needs to be looked into from a different perspective. At times I feel my players could have done much more, and they were not doing the right things. But I discovered it’s not always the way I see it. I gauged maybe I failed myself – to explain it to them in the manner it needed to be. That’s the reason they failed,” Miranda turns modest.

“It is the players who play. I need to prepare them best, all in an effort to get a favourable result. Losses will hit you on your face — that is the only thing that is guaranteed. For everything else we have to have the correct attitude, and keep trying.”

Miranda’s biggest assignment came in the Hero Indian Super League when FC Goa summoned him as the Head Coach during the later stages of the competition, a gesture for which he stays “immensely grateful.”

“The club trusted a young coach. There are so many around. It meant a lot to me.

“Man management is such an integral part. As players, everyone wants to play. But at times you need to take the harsh decision as a coach for the betterment of the team. It stays your responsibility to make the player not feel left out, and feel a part of the team. The human side also has to be taken into consideration,” Miranda pronounces.

“As a player, it was about my role, and its impact on the team. But as a coach, it’s about the role of others for the impact of the team. Here you know you can make a difference, but you cannot do it individually.”

“Only a coach understands how big a team-game football is.”