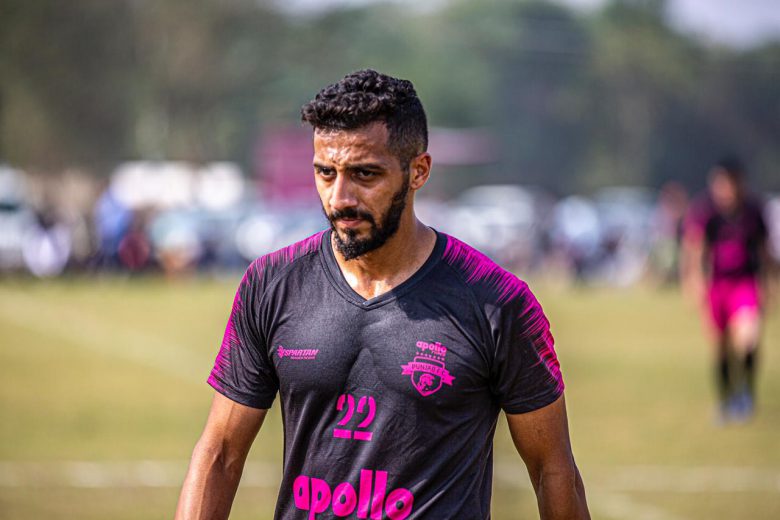 Back in Mumbai, it is normal that an infant would have tried their hands on a wooden bat and a tennis ball. Niitesh Aswaani was no different. Growing up in Chembur, Mumbai, Niitesh was introduced to sports by playing cricket. He even managed to make a name for himself while pursuing cricket at Chembur Gymkhana with his bowling prowess.

But growing up, Nitesh was first introduced to football when he was fourteen-year-old. Seeing him play and get engaged in football, Aswaani’s parents insisted him to try his luck at the beautiful game.

“I never watched or played football earlier. Football for me began when I came across a couple of my friends playing in my society. Soon I joined them and the game captivated me. That’s when my parents pushed me to start playing football. Although I never thought I would come this far” – Niitesh Aswaani

In 2014, Niitesh was noticed by the finest in the industry. He was representing his school at Manchester United Premier Cup in Pune. Soon when Floyd Pinto (Former Kenkre FC and Indian Arrows Head Coach) and Joshua Lewis (Kenkre FC Owner) scouted Niitesh from the tournament, he could comprehend that his dreams were slated to turn into reality.

“Whatever I am today is all because of Kenkre FC and the staff who have put trust in me. I thank Coach Floyd Pinto and Joshua Lewis who first scouted me when I was representing my school in a Quarter Final match across an MSSA competition” – Niitesh Aswaani

Thereafter Niitesh went on to ply his trade for Kenkre where he played all the domestic tournaments. Playing under the guidance of Floyd Pinto, Kenkre FC were the only outfit back in the time to field a team in the MDFA 1st division with an average squad age of 15. They remained unbeaten that season and were promoted to the Super Division. Niitesh travelled to Sweden, Finland, and Denmark with Kenkre and represented them at the Junior I-League and 2nd Division League. He was later promoted to the senior team where he was bestowed with the captaincy for two years consecutively.

“I had my 2nd Division League debut in Siliguri when I was 18. My debut was against PIFA, and we won that game scoring 3 goals. That game is a memorable one, and I would cherish that match against PIFA forever.” – Niitesh Aswaani

With his robust performance at Kenkre, Niitesh was called for a U-23 Indian National football team camp. During the process, although Niitesh failed to make it to the squad, but he impressed the scouts from FC Pune City and immediately signed a contract with the ISL franchise after returning.

Getting an opportunity to train and share the dressing room alongside the likes of Marcos Tebar and Rafa Lopez, Niitesh experienced what professionalism in football meant. As a young Central Defender, it became difficult for him to make it into the main team, but he represented the Reserves team at the 2nd Division League. Leading from the back, Niitesh and co. managed a magnificent 7 clean sheets from 10 games.

Niitesh left FC Pune City and joined the Bangalore based South United. His versatility was revealed during his time in Bangalore. Naturally being a Central Defender, Niitesh adapted as a Right Back and also took roles in the Midfield at South United.

“I enjoy when people ask about my actual position. I’m always flexible and have had the experience of taking up several roles at Kenkre. I’m happy to play anywhere if I’m able to contribute to my team’s success” – Niitesh Aswaani 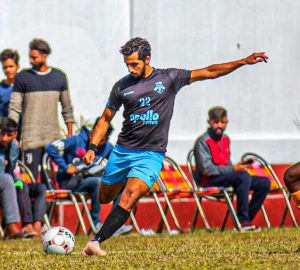 After his stint at South United, Niitesh received a call from the I-League. Punjab FC went looking for him and managed to sign him this campaign. Niitesh debuted for Punjab in an away match against Indian Arrows which was held at Mumbai. Playing at the highest level, that too at his neighbourhood, not only did Niitesh lived up to the expectations, but he went on to play a mesmerizing through ball to striker Dipanda Dicka, who failed to convert it into a goal. The match ended as a draw.

“It’s been a great season so far. I’m thankful to Mr Ranjit Bajaj for believing in me. I’m fortunate to have a family who has consistently motivated me to do better. When I debuted for Punjab, the only thought that crossed my mind was winning and giving my best until the last whistle. I couldn’t let this opportunity slip and let my people down.” – Niitesh Aswaani

Niitesh is managed and represented by the UK based Inventive Sports. Niitesh believes, alongside his family support, Inventive Sports has helped him a lot in his career. His manager, Wilbur Lasrado, who represents Indian international footballers Jobby Justin and Sahal Abdul Samad alongside several other spectacular foreigners, spoke highly of him.

“I knew Nitesh personally from his time at Kenkre since 2017. He is very passionate, hardworking, and a disciplined athlete. He is a strong character on and off the field and we at Inventive Sports believe that he has a lot of potential. The hardwork and hustle he has put in has shown the results. I firmly believe if he keeps his head down and continues to do his job, he will go a long way. If you ask me where do I see Nitesh five years down the line, my vision is very clear. I see him as one of the top defenders in the country playing at the highest level. He has the potential to make it to the national team provided everything falls in place.” – Wilbur Lasrado

Niitesh started his academy named Goal Football Academy at Chembur with his friends in 2016. He helps the underprivileged children pursue their passion at the academy, and has been able to find a few talented players who are extremely good at playing the game.

With a humble and jolly personality, Niitesh Aswaani, who turned 24 today, is one of the finest defenders at his age group. He dreams to don the blue coloured national jersey someday, and believes that the sky is the only limit!