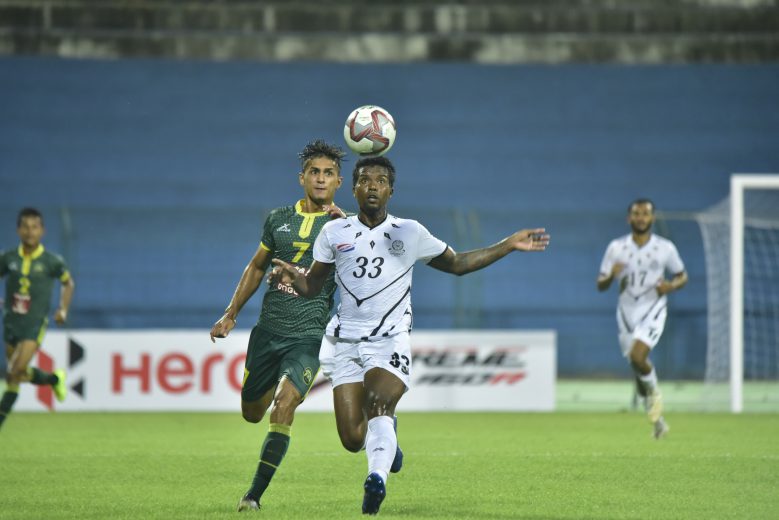 Kalyani, October 8, 2020: Mohammedan Sporting began their Hero I-League Qualifiers 2020 campaign with a last-gasp 1-0 victory against Garhwal FC as full-back Munmun Lugun scored a long-range goal in the penultimate (90+3′) minute to win the match for his team at the Kalyani Stadium on Thursday (October 8, 2020).

The match seemed to be veering to a goalless draw, with Mohammedan’s Willis Plaza missing a penalty in the second half. However, Munmun came to the rescue in the dying moments to snatch a dramatic victory and begin his side’s campaign with three points.

The first half began with half-chances for either side, with Garhwal FC earning a free-kick in a dangerous position in the very first minute. However, Muhammed Shafeer’s delivery was collected by Mohammedan’s captain and custodian Priyant Singh. In the fifth minute, Willis Plaza was played in on goal with a wonderful long pass but his first-time shot from a tight angle went wide of the target.

It was the Kolkata-based side that dominated possession for most parts of the first half, with wingers Himanshu Jangra and Vanlalbiaa Chhangte looking dangerous down the flanks. Both entered the penalty area on a number of occasions but could not help their team open the scoring as the Garhwal FC defence was up to the task.

The Black Panthers dominated possession throughout the first 45 minutes but were unable to find the breakthrough, with Garhwal creating chances on the counter attack and goalkeeper Sayak Barai looking confident in his handling.

Interestingly, it was the Delhi-based team that almost took the lead in the 21st minute, creating the best chance of the first half. Their Nigerian striker Victor Philip got on the end of a perfect, swerving ball from the right flank with an immaculately timed jump but his close-range header missed the goal by a whisker.

Victor entered the thick of things once again three minutes before half time — shooting powerfully from a narrow angle but was denied by Priyant, who made a low, diving save at his near post.

Both sides made changes at the break, with SK Faiaz coming on for Mohammedan and Uttam Rai taking to the pitch for Garhwal as the match continued to remain a tense, cagey affair. Chances were few and far to come by, with Plaza dropping deep and looking to take up a playmaking role for the Black Panthers.

At the hour mark, Himanshu beat his opposing full-back down the left flank and charged into the box, before playing a low cross across the six-yard line which was cleared by a sliding Neeraj Bhandari.

Moments later, Victor broke through the Mohammedan defence and raced into the penalty area. As soon as he looked set to pull the trigger, he was denied by a brilliant last-ditch tackle by Kingsley Eze, sending the ball out for a corner kick.

Mohammedan earned a golden chance in the 67th minute to take the lead as Gani Ahmmed latched on to a slide-rule through-pass by Plaza and was brought down by Sayak Barai, with the referee booking the goalkeeper and pointing to the penalty spot. It was Plaza who stepped up to take the resulting kick but he failed to convert the opportunity as the ball hit the upright and went out of play.

Five minutes later, Plaza was to be denied by the woodwork yet again — this time the crossbar. Faiaz played in a chipped ball from the left side of the penalty box and the Trinidadian saw his headed attempt come back off the bar.

Yan Law’s team continued to pile on the pressure as the final whistle came closer but the opening goal remained elusive. In the 79th minute, Moinuddin charged down the right side and played in a lofted cross for Faiaz, who had the goal gaping in front of him but could not adjust his body in time to head the ball. Plaza thundered a volley just a minute later but it was blocked by Bala Alhassan.

Garhwal defended bravely against the relentless Mohammedan tide but in the 88th minute, they could have nicked the win as Victor played in Uttam down the middle with a deft through-ball. However, the forward fluffed his lines and saw his shot go wide of the post.

Four minutes of added time was announced and just as the match looked to be headed to a draw, Munmun Lugun secured the three points for Mohammedan with a goal worthy of winning any match. 30 yards away from goal and in the third minute of added time, he struck a powerful, dipping shot with his left foot that left the keeper with no chance and sent his teammates and bench into wild celebrations.

After the match, Mohammedan Sporting Head Coach Yan Law said, “Every team is here to compete. It was a tough match and we missed our chances — missed a penalty and hit the woodwork twice. Luckily, at the last minute, we scored a goal and hopefully, we will take this forward and pick up more points in the upcoming matches.”

Garhwal FC Head Coach Vikas Rawat commented, “In football, you have to keep pushing till the last minute and even added time. However, this result is not a heartbreak for us. I am sure it will make us tough and we will learn a lot from this game and it will make us stronger.”

With this result, Mohammedan Sporting join fellow Kolkata side Bhawanipore FC with three points from their opening game while Garhwal FC remain empty-handed despite being minutes away from recording a memorable result.

Both sides will be in action on the next matchday (October 11, 2020), with Mohammedan Sporting taking on the team from Gujarat — ARA FC at the VYBK Stadium in Kolkata and Garhwal playing FC Bengaluru United, who began their campaign with a loss to Bhawanipore FC, at the Kalyani Stadium.

Bhawanipore register first victory post Covid-19 lockdown after a comfortable 2-0 victory over Bengaluru United
Ishan Pandita: I will let my play do the talking