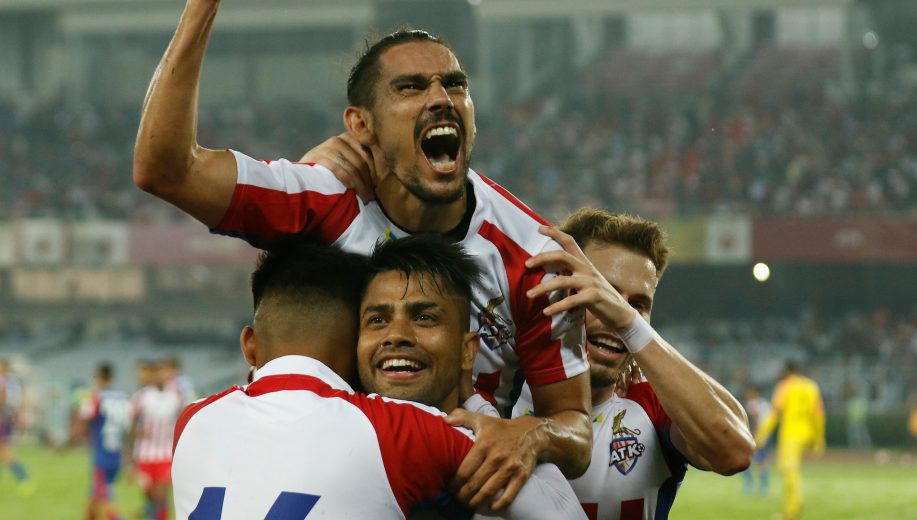 ATK ride on Williams brace to stage a thrilling comeback to reach Hero ISL final after a 3-1 win over Bengaluru FC in the 2nd leg of their semi-final clash at the YBK.

Bengaluru had won the first leg 1-0 but ATK’s resurgence in the second leg saw them win the tie 3-2 on aggregate. ATK now face Chennaiyin FC, both two-time Hero ISL champions in the grand finale in Goa on Saturday, March 14.

It was Bengaluru who took the lead through Ashique Kuruniyan (5’) early in the game but Roy Krishna (30’) pulled one back in the first half. David Williams then did the star turn for ATK with a brace in the second half (63’, 79’) to send his team through to the final against Chennaiyin FC on Saturday.

Ashique put the visitors into the lead as early as in the fifth minute as he got on the end of a pass from Nili Perdomo. The winger skipped past the challenge by Sumit Rathi and beat Arindam Bhattacharya at the near post to hand Bengaluru the advantage. The winger had another opportunity to double the lead in the 19th minute. Sunil Chhetri found him in space and he cut inside from the right to see his effort go over the bar.

Bengaluru custodian Gurpreet Singh Sandhu was called into play when Roy Krishna trapped a ball from Prabir Das and laid it for the onrushing Williams, whose first-time shot was just about kept out by the goalkeeper. Just at the half-hour mark, the home side pulled one back. Williams found Das in space on the right and his cross towards the near post was slotted into the back of the net by Krishna with a first-time effort.

After the break, ATK continued to see more of the ball but struggled to carve open the rigid Bengaluru defence. The visitors were happy to put bodies behind the ball and hit the opposition with quick counterattacks. In the 60th minute, Williams was brought down by the trailing leg of Suresh Wangjam and the referee awarded a spot-kick. From the ensuing penalty, Williams sent Gurpreet the wrong way to make it 2-1.

Bengaluru did come close to equalizing when Chhetri’s free-kick found Dimas at the near post and his attempt to flick it in went a few inches wide. Antonio Habas threw Mandi Sosa and Jayesh Rane into the mix as the Kolkata side searched for their third goal. Arindam made a crucial save in the 75th minute as Suresh sent an inch-perfect ball for Kevaughn Frater but the Jamaican striker’s shot from point-blank range was saved by the ATK custodian.

Four minutes later, Das and Williams combined once again to put ATK ahead on aggregate. Rane sent Das to the byline down the right-wing and his cross was headed in brilliantly by Williams, beating Gurpreet all ends up.

Carles Cuadrat introduced Leon Augustine for Pedromo as they looked to stage comeback. However, the visitors were repelled by a stout ATK defence who booked their berth in the final in Goa.